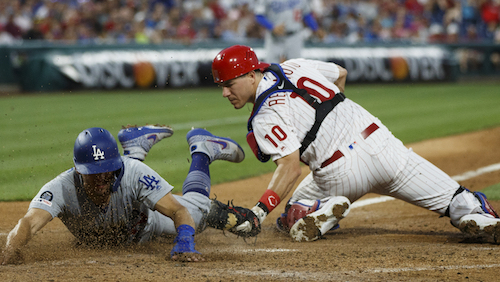 Are you sure you want to understate what happened last night at Citizens Bank Park?

After the Los Angeles Dodgers bitch-slapped the Phillies 16-2, sending them a spiraling 9 1/2 games behind the NL East-leading Atlanta Braves?

That’s your only answer?

Facing Clayton Kershaw, the Phillies were +160 underdogs, one of the biggest underdog lines you will see for a baseball team playing at home.

But, as Corey Seidman of NBC Sports Philly says:

The Phillies have been outscored 34-8 by the Dodgers, the team every other club in the National League knows it probably must get through to make it to the World Series. What is the Phillies’ goal at this point? Is it to chase the wild-card? Is it to make it to a one-game playoff, cross their fingers and call it a job well done?

That wasn’t the goal in the spring, when this team had 90-plus win aspirations and looked like it might feature five All-Stars.

This is why the game isn’t played on paper, they say.

“I think after yesterday’s game everybody’s real positive and after a game like tonight you feel like you got kicked in the teeth,” said Jay Bruce, who stranded six runners. “You get to start over each day and you get to start a game at 0-0 and have an opportunity to win. We have to play better, for sure. But as poorly as we’ve played, we’re still right there in the wild-card hunt and you never know what’s going to happen in the division so we just need to play like we can and play more consistent baseball and see what happens. … A night like tonight is tough but we get to come back tomorrow and do it again.”

There weren’t many players in the clubhouse when it opened. Harper was sitting right there waiting, like he always does, no matter the game’s outcome. He deserves credit for that, even if some of his answers rang hollow.

Zach Eflin, who has allowed 22 runs in his last 20 innings, actually took some positives from his start.

“I really felt like I probably gave up only two hard-ish hit balls that (fourth) inning,” he said. “But at the end of the day, I felt like I got better today. I thought me and J.T. (Realmuto) did a good job of mixing pitches and really getting my curveball and changeup over. So although the box score doesn’t really look too good, I feel like I took a lot of positives from today.

“We’re all calm. There’s no need to panic. We know how good we’re going to be and it’s just going to take that one time, that one game that everything clicks and then it’s going to be a fun rest of the year.”

They’re fine. Everything is fine. The season isn’t deteriorating two weeks before the trade deadline.