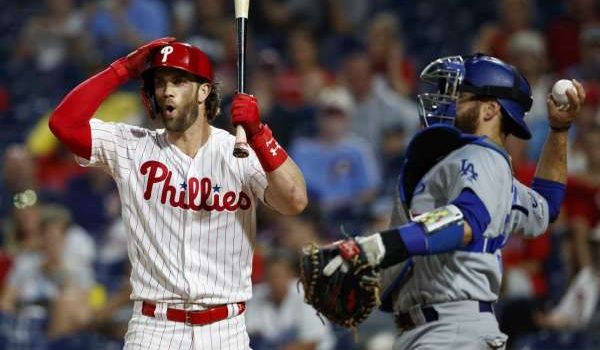 DODGERS BEAT RAIN AND PHILS IN AN ALL-NIGHTER!

David Freese hit a tiebreaking homer in the seventh inning, six Dodgers pitchers combined on a two-hitter and the Dodgers beat the rain and the Phillies 7-2 early today.

The loss left the Phils at 49-47, 8 1/2 games behind the Atlanta Braves in NL East and a half-game behind the Brewers for the second wild card spot.

Justin Turner also homered, and A.J. Pollock and Kiké Hernandez drove in runs for the NL-West leading Dodgers, who improved their MLB-best record to 64-34 while remaining 14 games in front of Arizona. Rain delayed the game in the top of the third, and the last out was recorded at 1:42 a.m. The teams are set to conclude the four-game series at 12:35 p.m. today.

“Try not to go into extra innings tonight,” Freese said. “Glad we got it in and got the W.”

The Phillies didn’t get a hit until Scott Kingery’s bloop single to center in the sixth. Adam Haseley singled with one out in the ninth.

“We don’t have time to be disappointed,” Phillies manager Gabe Kapler said. “We have to be here early in the morning.”

“You manage the game like the playoffs,” Roberts said. “Julio was the glue. It was a collective team win.”

Los Angeles went ahead for good with two runs in the seventh. After Max Muncy started the frame with a single to right, Freese drove a fastball from Juan Nicasio (1-3) over the wall in right to give the Dodgers a 4-2 lead.

“Just got the barrel out and caught it,” Freese said.

Los Angeles went up by four runs in the eighth on Turner’s two-run, pinch-hit drive to left off Austin Davis.

Phillies starter Nick Pivetta didn’t give up a hit but surrendered a run while walking four and striking out four in 2 1/3 innings.

Urías helped himself with an RBI single in the sixth that put Los Angeles up 2-0.

By Philadelphia got its runs in the sixth on Brad Miller’s bases-loaded walk and Haseley’s RBI groundout.