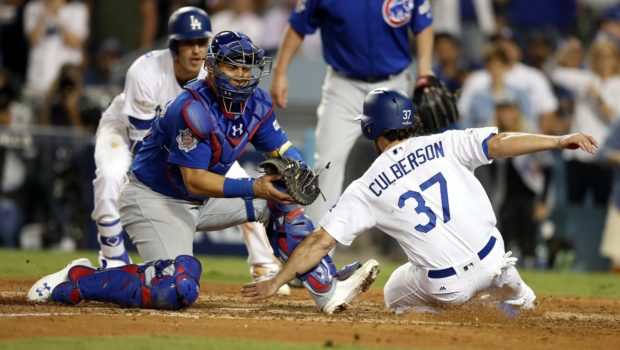 DODGERS BEAT CUBS IN NLCS GAME 1 5-2 AMID A CONTROVERSY THAT DIDN’T MATTER!

Stros walk off to a 2-0 ALCS lead over Yanks:

Which is not allowed by the rules.

So the Dodgers got a 5-2 win over the Cubs in Game 1 of the National League Championship Series.

In the seventh inning, with the Dodgers clinging to a two-run lead, Culberson raced around third on a Justin Turner single, sliding directly into the shin of Contreras.

That rule, implemented before the 2014 season in large part because of the collision that cost Giants catcher Buster Posey most of 2011, states that “unless the catcher is in possession of the ball, the catcher cannot block the pathway of the runner as he is attempting to score.” Suffice it to say, the reactions to that ruling among players and coaches depended entirely on what team they represent.

“I looked at it just like everyone looked at it, and as the rule states, he was in violation,” Dodgers manager Dave Roberts said. “It was pretty clear to us, so that’s kind of pretty simple.”

Naturally, Cubs manager Joe Maddon saw it a little differently. After the umpires signaled “safe,” he stormed out of the dugout to argue, quickly earning him an ejection. He fumed in his postgame news conference, comparing the collision rule to Chicago’s short-lived soda tax.

“My point is all rules that are created aren’t necessarily good ones,” Maddon said.

MLB created the rule as a way to protect catchers from violent collisions, especially in light of modern research about the dangers of concussions. From the start, not everybody saw it as a positive, with some in the game arguing it took an exciting, hard-nosed play out of baseball. John Lackey, the Cubs pitcher on the mound at the time, said that at one point, he and the umpires “had a discussion on how soft baseball is getting.”

Maddon dislikes the rule in general, but also expressed displeasure with the interpretation of it Saturday night. He thought the throw home from left fielder Kyle Schwarber drew Contreras slightly up the third-base line, forcing him to impede with Culberson. Maddon said that there was “nothing [Contreras] could have done differently.” The umpires thought Contreras stuck out his leg to cut off Culberson’s lane to the plate.

“I, from day one, have totally disagreed with the content of that rule,” Maddon said. “I think it’s wrong. I think anybody that’s played major league or even minor league baseball will agree with me 100% on that.”

Not Culberson. The reaction around the Giants after Posey’s injury offered him a bit of firsthand experience about catcher collisions. He appreciates baseball’s efforts to make the game safer.

“I’m not sure anybody likes trucking the catcher,” said Culberson, filling in at shortstop for the injured Corey Seager. “I never was a big fan of it. I’m not out there trying to hurt people. It’s a run. Our lives and healths are a little bit more important. That’s just the way I feel about it.”

Ultimately, the run almost certainly didn’t prevent the Cubs from winning, a point Maddon emphasized. They finished with just four hits, and the Dodgers retired the final 18 batters they faced. The Cubs simply lost.

But before today’s game 2, the merits—or lack thereof—of the “Posey rule” will again reverberate around the baseball world, a familiar routine every time it appears in an important moment.

“After a few years of it, that’s just baseball now,” Culberson said. “Now everybody knows you can’t block home.”