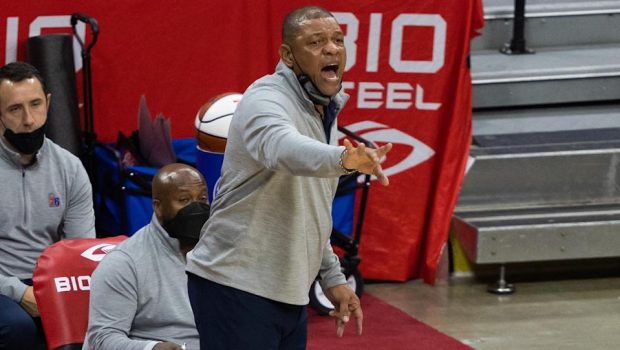 The Sixers bench had been outscored 32-0 in the first half in game 2 Tuesday night, and coach Doc Rivers was pissed.

“We challenged them at halftime,” Rivers said. “We really did. … We had zero (bench) points at halftime. And we challenged the defense. We said, ‘Guys, if you guys get stops, with the spacing we have, we’ll score. But you can’t play half court all the time, because the other team is scoring.’ I thought our guys did a phenomenal job defensively first, and then we picked the right guys, obviously.”

Rivers’ second unit outscored the Hawks’ bench by a 26-17 margin after halftime.

According to George Hill, Rivers wasn’t at all worried about his halftime message being too harsh.

“Just challenged us,” Hill said after practice yesterday. “That’s what good coaches do. They come in and sometimes you have to rip the guy’s ass to play well, and I think he ripped all our behinds at half. It wasn’t pretty, but sometimes hearing the truth is what you need. I think sometimes it hurts to hear the truth but you need it, and I think our second unit responded well to that.”