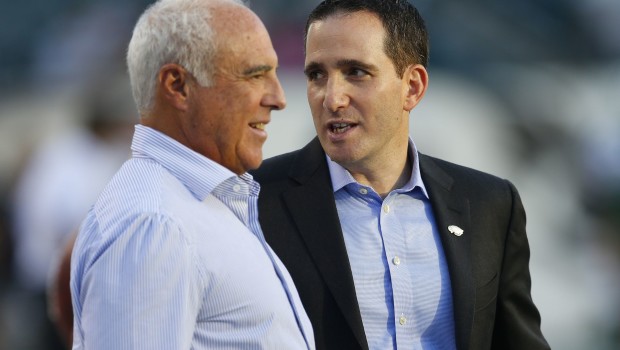 DO THESE JUGHEADS HAVE THE JUDGMENT TO FIND A WINNING EAGLES COACH?

Jeff Lurie and Howie Boy Roseman are setting out to find the Eagles’ next coach. How many of you think they would even know the difference between a winner and a loser?

My feeling is that this search will be handled — in the words of Demi Moore in “A Few Good Men” — in “a fast-food, slick-ass ‘ Persian Bazaar manner with which they seem to handle everything else. Something’s gonna get missed.”

I watched Jeffrey Lurie’s Wednesday presser hoping to discover something — anything — that I didn’t already know about why the Eagles’ owner fired Chip Kelly as coach and Supreme Leader on Tuesday night.

Lurie’s press avails — which are so rare you can count them on one hand for any year — are like that:

Lots of phony talk about values and tradition and other boilerplate bull that we have all gotten used to since Lurie’s mother signed the $185 million check to buy the team in 1994.

She had to do that because no financial institution would have lent him the money because he had never done anything on his own in his charmed life.

I have nothing against rich guys — some of my best friends are rich — but Lurie has that arrogance and smugness that you see in members of the lucky sperm club, and he is now sitting on a pile of cash (I assume he paid his mother back with interest) because owning an NFL franchise is like having your own ATM.

Nobody can screw it up — with the exception of Leonard Tose back in the 1980s, and he was an exception to many rules.

I met Lurie socially when he arrived in Philly and found him to be bright, personable and committed.

Since then, however, I have observed that he is totally lacking in judgment.

He was born in Boston and had the hots to buy the hometown Patriots but got outbid by Robert Kraft. So he decided to scratch his NFL ownership bug by buying the Eagles.

In nearly every step along his 21-year way, Lurie has shown that he is impetuous, loyal (normally a great quality) to a fault and a poor judge of talent.

He inherited Rich Kotite as coach, fired him, hired Ray Rhoades, and didn’t fire him even after a six-win season, but a three-win season was too much. And he kept Andy Reid for 14 years, well past his sell-by date, and Reid never won a Super Bowl.

Even with the hiring of Reid, who had a terrific run for eight years before losing focus and failing for his last four, Lurie caught a break.

In 1999, when Lurie tapped him, Reid wasn’t eveen a coordinator but quarterbacks coach of the Green Bay Packers, whose starting QB was a fellow named Brett Favre. You think Reid had anything to do with Favre’s excellence?

When he finally cashiered Reid after the 4-12 2012 season, Lurie was so dead set on hiring Kelly, who had lit up the sky at the University of Oregon, that even Kelly’s initial refusal didn’t dissuade the owner.

Like a teen-ager in heat after being turned down by a prom queen for a date, Lurie took another run at Chipper, who agreed.

I am wondering how detailed the vetting process was.

If half the comments from Eagles players are accurate, Kelly sounds like a true sociopath who abhors contact with people.

How did Lurie and his lapdog Howie Boy Roseman miss that important character flaw?

Sort of the same question John McCain had of the vetters of Sarah Palin, who if you scratched the surface was so unqualified for high office that it became obvious to the public very quickly.

How did Howie Boy rise so quickly to become general manager of an NFL team, which he claims has been his dream since he was a teen? He has no football background, either as a player, scout or coach, but he has endeared himself to the endearable Lurie the same way the equally unqualified Joe Banner did before Lurie fired his childhood chum in 2012.

So these two jugheads with terrible football judgment — Lurie and Howie Boy — are now setting out to find the Eagles’ next coach. How many of you think that you would know the difference between a winner and a loser?

Lurie’s press conference was replete with mentions of “communication,” “opening your heart” and “emotional intelligence.”

That sounded like a Match.com profile not the blueprint for a successful NFL coach.

My feeling is that this search will be handled — in the words of Demi Moore in “A Few Good Men” — in “a fast-food, slick-ass ‘ Persian Bazaar manner with which they seem to handle everything else. Something’s gonna get missed.”