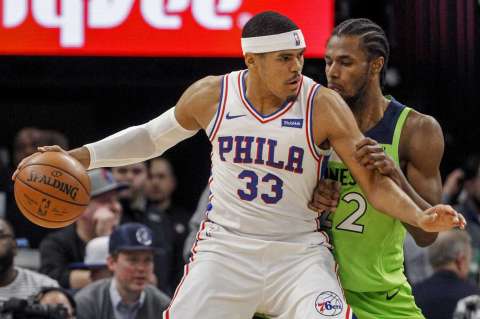 DO SIXERS EVEN WANT TO BEING BACK FREE AGENT TOBIAS HARRIS?

During the playoffs, the Sixers’ fielded a starting lineup of Jimmy Butler, Tobias Harris, Joel Embiid, Ben Simmons and J.J. Redick, who played just 21 games together in 2018-19 — 10 in the regular season and 11 in the playoffs.

And it’s unclear if that unit will return intact next season, as Butler, Harris and Redick are bound for free agency.

In other words, we don’t know exactly what their style of play is going to be, going forward. Depends on how Embiid and Simmons develop, whether Butler returns to do the iso/pick-and-roll thing and whether Redick remains to take all those dribble handoffs from Embiid and fire from deep.

Whether because of chemistry issues or other factors, Harris had his ups and downs in the playoffs — struggling early the first round against Brooklyn before finding his footing, then cratering against Toronto in the Eastern Conference semifinals.

He shot just 38 percent from the floor against the Raptors, including a dismal 27.9 percent from 3-point range. And he was far from Toronto’s biggest defensive priority; the Raptors were clearly more concerned with Embiid, Butler and Redick.

One for experience? Or an indication that Harris, who had appeared in the playoffs just once in his first seven seasons, is one of those guys who puts up nice numbers with bad teams?

These are the things the Sixers have to weigh in the next month or so. These are the factors that will define the team’s future, and that of Tobias Harris.