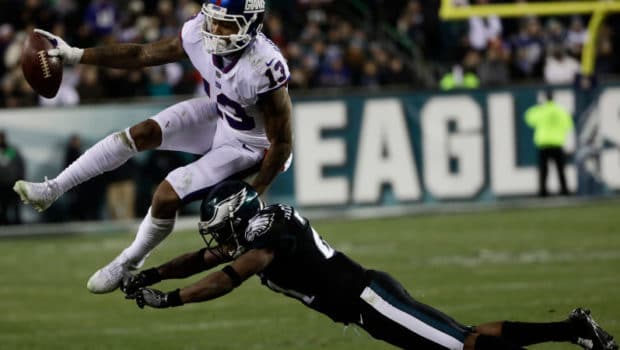 Odell Beckham Jr. is the brand of player who has fans on the edge of their seats wondering what he might do next.

He has a knack for saving the most outstanding moments for the ones with the most on the line.

As a ball carrier, Beckham traveled 360.4 yards of total distance last night against the Eagles, but 227.6 of that came in the fourth quarter.

Through all that in the final act of the game, we waited for the moment where the Giants would find Beckham to finally earn the late lead.

He was getting open all night against the Eagles cornerbacks, averaging 2.9 yards of separation on his 20 targets.

Yet, that moment never came as Eli Manning threw his third interception of the game to seal the win for the Eagles. And that brings us back to that razor-thin margin of error on offense.

An 11-catch, 150-yard night from their best offensive player was simply not enough to overcome a disastrous night from the Giants’ two-time Super Bowl winning quarterback.

Eli Manning managed just 5.7 yards per attempt and consistently put the team behind the eight ball in a game where he threw a 2016 season-high 63 passes. The Eagles didn’t even need to do much to force him into those errors.