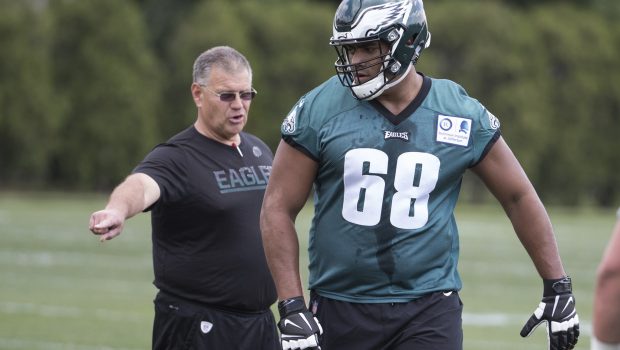 The NFL stands for Not For Long.

Which is to say that injuries happen all the time and that presents opportunities for players to make their mark.

In this case, Andre Dillard’s season-ending injury opens up a slot at left tackle.

And coach Doug Pederson is not ruling out no-hoper Jordan Mailata, a third-year player who spent the first two seasons of his American football life on Injured Reserve and has never played in an NFL regular-season game has made strides on the field in this camp.

At 6-8, 346 pounds Mailata has the size. But can the former rugby player make the transition to left tackle?.

“He had a really good week,” Pederson said of Mailata.

“Getting back out there now and getting comfortable with the position and the pads on, because he did miss a little bit of time in camp, kind of going through the walkthroughs, but now that he’s had a chance to go through some padded practices, he’s done a really nice job. He’s a massive human being, as we know, he moves really well. He still needs to focus on some fundamental things, but he’s done a nice job.”

One thought on “DILLARD’S INJURY GIVES LONG-SHOT MAILATA A CHANCE AT EAGLES LT!”