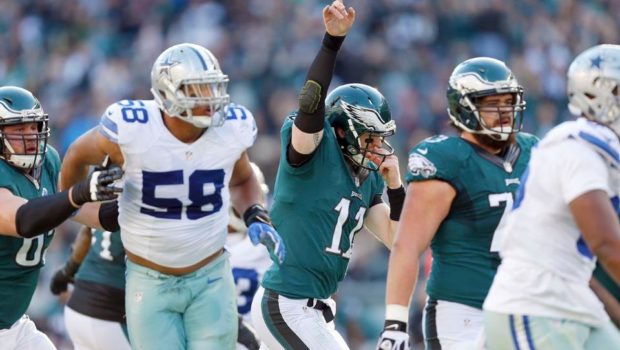 WHAT A DIFFERENCE A YEAR MAKES! HOW CARSON WENTZ HAS GONE FROM 3RD-STRINGER TO EAGLES’ GAME-CHANGER!

“Everything about his quarterbacking is much better now than it was this time last year, when he was still officially a third-stringer. His release is more compact, and he holds the ball higher. He has had some drills under duress, so this isn’t just a ‘throwing in shorts against air’ observation.

“In terms of calling plays, audibles, cadence and the like, it’s night and day. He now handles himself like an established starting QB up until the moment he cocks to throw. As to footwork, it’s hard to see that in live drills from field level. We still see some off-target stuff when he resets. I doubt he is ever going to be super-smooth when it comes to sliding around the pocket.

“Overall, Wentz looks much more solid on a variety of levels now than he looked in OTAs or training camp last year, when he appeared to be simultaneously mastering a rebuilt throwing style and figuring out an NFL playbook. He also looked better in minicamp than in Stage 3 OTAs, which should be expected.

“A few passes from this week really struck me: Wentz switching to a three-quarter arm delivery to deliver a pass into a tight window, and Wentz throwing low on a sideline route intentionally so only his receiver had an opportunity to catch it. There are still some clunkers, but these are the kinds of high-difficulty throws Wentz has to make to take a significant leap forward.”