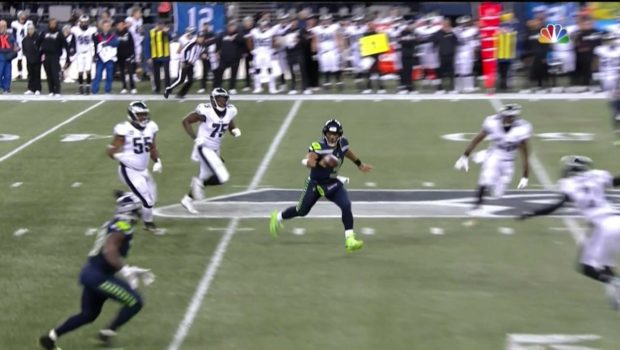 In the fourth quarter, Seahawks quarterback Russell Wilson threw an illegal forward pass to Mike Davis that picked up 17 yards on third-and-8. The officials missed it, and Eagles coach Doug Pederson didn’t challenge. That was a mistake.

Replays clearly showed that the ball traveled forward after Wilson crossed the line of scrimmage, and if Pederson had challenged, the Seahawks would have faced fourth-and-long and would have punted after the penalty. Instead the Seahawks got the first down and scored a touchdown on the drive.

After the game, Pederson said he never saw a definitive replay angle and was hesitant to throw a challenge flag after he had already lost a previous challenge.

“Real-time it looked fine. It looked legit. We didn’t get all the necessary looks and they hustled to the line,” Pederson said. “At the same time it looked good and I trust the guys upstairs making those decisions and didn’t challenge. I already challenged one in the half and lost that, so I didn’t want to risk another timeout.”

The touchdown the Seahawks scored after that illegal forward pass all but wrapped up the game. Pederson deciding not to challenge was costly: