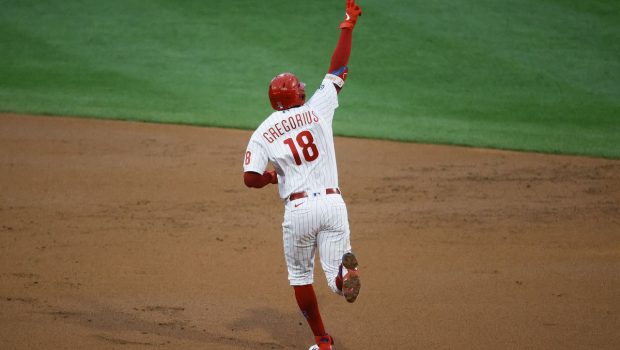 Didi Gregorius hit his eighth career grand slam, and the Phillies beat the Milwaukee Brewers 5-4 for their first three-game win streak third straight victory since the season started the season 4-0. The Phillies played their seventh straight one-run game (4-3) and are the only team in the NL East above .500 at 16-15.

They lead the Mets by a game in NL East.

Enyel De Los Santos — on the lineup card for this one — left two runners stranded to end the eighth. Jose Alvarado returned from a two-game suspension for triggering a bench-clearing incident and worked a scoreless ninth for his second save.

Alvarado said he has never tried to throw at a batter.

Rhys Hoskins hit an RBI single in the first, and Peralta allowed five runs over the first five batters. Peralta settled down from there — he struck out six straight at one point — and he combined with three relievers on a four-hitter.

But the Brewers rallied on another chilly, windy night at Citizens Bank Park. Avisail Garcia hit an RBI single in the third inning that was almost more, but a replay review overturned a safe call at the plate. More than 10,000 fans cheered each time a replay showed Daniel Vogelbach was out on center fielder Odubel Herrera’s throw, and a brief review took the run off the board.

Tyrone Taylor connected for a pinch-hit homer in the fifth against Chase Anderson, and Garcia added a two-run single off Jojo Romero that cut it to 5-4. Taylor has two pinch-hit homers this season and three overall.

Anderson, who was 38-27 with a 3.83 ERA in four seasons with the Brewers from 2016-19, departed after 4 1/3 innings. Moore — the fourth Phillies pitcher — tossed a scoreless seventh in his first appearance since April 17 after going on the COVID-19 injured list. Moore said he did not test positive for coronavirus.

One thought on “DIDI’S DEEP-DISH SLAM LIFTS PHILS TO ONE-GAME LEAD OVER METS!”