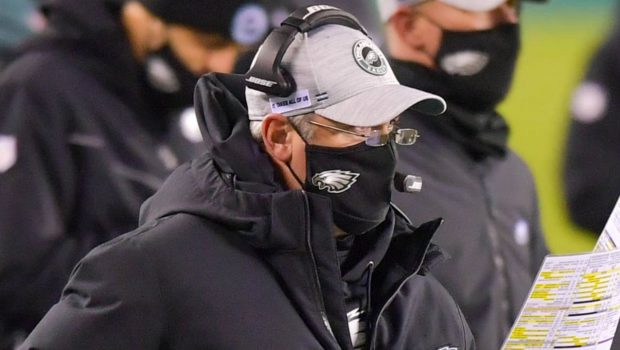 DICK VITALE ON EAGLES PEDERSON’S TANK: THIS WAS THE NFL, NOT CYO!

Doug Pederson has brought slings and arrows down on Philly because of his decision to bench Jalen Hurts in favor or Nate Sudfeld, costing the Eagles any chance of winning last night.

Even Dick Vitale, who never criticizes anyone, ever, couldn’t help himself:

Fans r missing the point on the comments about Eagles . Stating Giants should stop whining since they only won 6 games is not the point . This was the @NFL not CYO where everyone plays .At stake was a playoff spot & Jalen Hurts should have been on the field.

Doug Pederson should be ashamed. What happened to “integrity of the game”?

Dude Doug Pederson is a Super Bowl winning coach and he’s just throwing a game? This is 1000 percent wack.

Wtf was that??? The Eagles just threw the fucking game…

Good for Collinsworth for calling out Doug Pederson.

Doug Pederson is a disgrace to professional sports.

I thought Wentz was being a baby but I wouldn’t want to play for Doug Pederson either. Now all 3 of his QBs hate him

Doug Pederson kind of a dirt bag for going for it on 4th & Goal in an OBVIOUS Field Goal situation and then benching his starting QB because of his poor coaching choice.

The Giants again have only themselves to blame.

But what Doug Pederson did tonight on National TV is a really bad look for the league.

No one should feel bad for the Giants. As I said, they made their bed.

This is a bigger issue about the integrity of this game that Doug Pederson is mocking. Hard not to see it any other way.

You are my enemy Doug Pederson

So I know the @Eagles got 3 picks better in the draft after losing to WFT but the way Doug Pederson goes about his business has been DISTURBING. It felt like a slap in the face of the players that have been working their asses off the entire season. #Embarrasing

This is laughably pathetic.