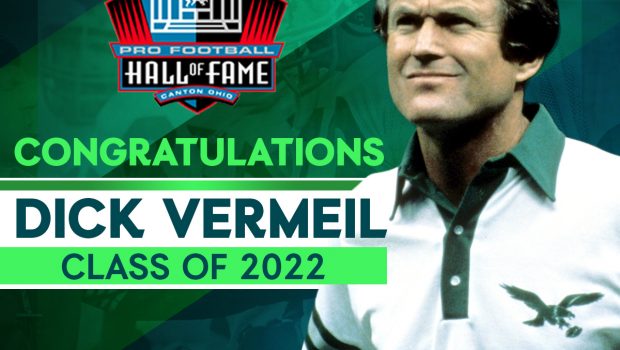 DICK VERMEIL TOOK EAGLES TO SUPER BOWL 15, AND HE’S GOING TO THE HALL OF FAME!

And he more than delivered.

Vermeil coached the Birds to a Super Bowl appearance in the 1980 season, a Super Bowl victory with the St. Louis Rams in the 1999 season, and a 2003 AFC West title with the Kansas City Chiefs.

He was twice named the league’s best head coach and he proved himself to be a versatile communicator and motivator in a career that spanned nearly four decades and included 15 seasons as one of television’s top game analysts.

Last night he was awarded the highest individual honor as he was named to the Pro Football Hall of Fame’s Class of 2022 in a prime-time broadcast during NFL Honors.

Vermeil will be inducted into the Pro Football Hall of Fame in Canton, Ohio, tentatively scheduled for Saturday, August 6.

"Dick was a special coach and he's a special man and there are a lot of people happy that he has been named to the Pro Football Hall of Fame." – Ron Jaworski#FlyEaglesFly