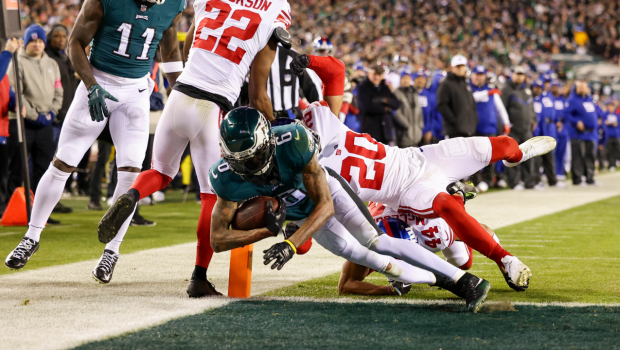 DEVONTA WORTH HIS WEIGHT IN EAGLES GOLD: 61 YARDS AND A TD!

DeVonta Smith caught 6-of-10 targets for 61 yards and one touchdown in the Eagles’ Divisional Round win over the Giants.

He caught a 40-yard dime from quarterback Jalen Hurts on the opening drive to set up a Dallas Goedert touchdown.

He would later get in on the scoring on a 9-yard screen to the perimeter behind elite blocking from fellow wide receiver A.J. Brown to send the Eagles up 14-0 in the first quarter.

The second-year standout would otherwise be confined to short area work and would see his volume dry up in the second half after the team entered the break up 28-0.

Smith and the Eagles await their NFC Conference Championship opponent as they are set to host the winner of the Cowboys-49ers game next Sunday.