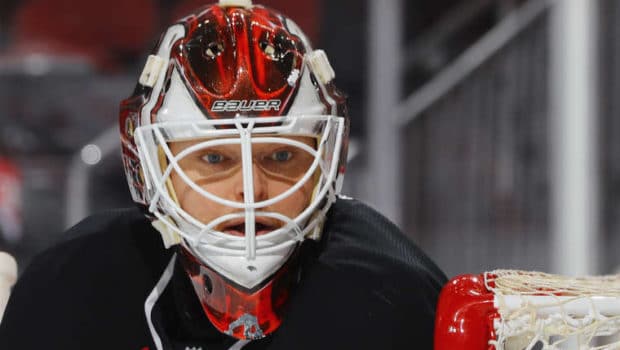 Cory Schneider made 16 saves in his first shutout of the season as the Jersey Devils beat the Flyers 4-0 last night to stop a seven-game losing streak. “It was a character win,” Seth Helgeson said. “Throughout the entire game, everyone was sticking up for each other. It wasn’t one guy. It was the whole team.”

The shutout was the 22nd of Schneider’s career, and first in 45 games. His previous one came on Jan. 16 last season, a 2-0 win over the Arizona Coyotes.

“(The) shutout is nice, but the only reason a shutout is good is because it probably means you won the game,” Schneider said. “So that’s what’s important, especially with the slide we — and I, personally — (have) been on.”

“Look at our last two or three,” Brandon Manning said. “We want to be better.”

New Jersey broke through on Parenteau’s power-play goal at 7:40 of the first period.

Parenteau was stationed in front of the net when Mike Cammalleri’s drive from the top of the right circle ricocheted off him and past Flyers goalie Steve Mason.

The lead grew to 2-0 almost 6 minutes later when Wood jammed a loose puck under Mason, who was replaced by Anthony Stolarz before the start of the second.

“I haven’t talked to (Mason),” Flyers coach Dave Hakstol said when asked if Mason was injured. “I just talked to (head trainer Jim McCrossin) and we made the switch.”

Schneider’s toughest stop came 5:47 into the second period when he made a diving glove save on Michael Raffl’s stuff attempt to keep the score 2-0. Replays showed the puck never crossed the goal line, but Hakstol used his coach’s challenge. The call on the ice was upheld.

“I felt confident it would be no goal,” Schneider said. “I felt like I got it in time.”

Henrique’s goal 7:52 after Schneider’s save essentially sealed it. The sequence began with Cammalleri making a stretch pass to Taylor Hall, who chipped the puck to Parenteau along the half boards. Parenteau found Hall behind the goal line, who in turn set up Henrique in the slot for his eighth of the season.

New Jersey outshot the Flyers 22-16. The Devils went 2 for 6 on the man advantage and killed off both Philadelphia power plays.

“This was probably the worst game we played all year,” Philly’s Wayne Simmonds said. “There’s no excuses. Nothing. We have to make sure we’re better.”