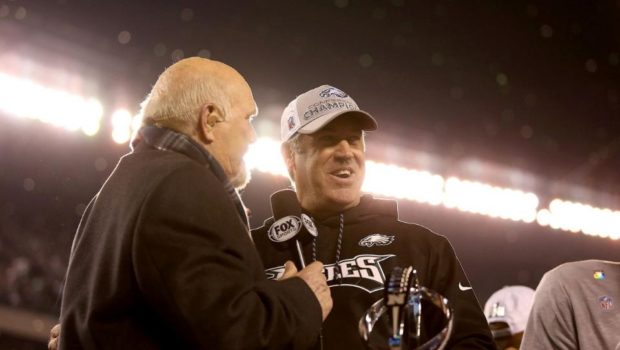 DESTINY’S DARLINGS! HOW THE EAGLES KICKED VIKES’ ASS AND MADE NICK FOLES A ROCK STAR!

So writes the Ringer’s Robert Mays:

In a six-week span, Foles has transformed from backup quarterback to inadequate replacement to rock star. Every passerby who spotted Foles in the aftermath of the Eagles’ 38-7 rout of Minnesota wanted a photo, and he was happy to oblige. The pictures weren’t limited to admirers, either. He also took snapshots with his wife, Tori, and his mom, who handed off her Canon to document the moment. This was a night worth remembering.

Foles has a seven-touchdown game to his credit, but his performance on Sunday evening was unquestionably the finest of his six-year NFL career. He tossed three touchdown passes and finished 26-of-33 for 352 yards, four more yards than Wentz registered in any single game this season. Not only did Foles mimic Wentz’s production, but he also did so while trying out his best Wentz impression. As Foles extended plays, pushed the ball downfield, and orchestrated plenty of third-down magic, it would’ve been fair for onlookers to question if the Eagles had somehow managed to replicate that famous scene from Space Jam; maybe Foles had supernaturally climbed inside Wentz’s body and taken his MVP-caliber talent.

With Foles playing the way he did against Minnesota, the Eagles looked a lot like the team that ran roughshod over the entire league for most of the regular season. Philly owned the most complete roster in football when the 2017 campaign began, an expertly assembled group that rightly earned vice president of football operations Howie Roseman an executive of the year award. From last spring through October’s trade deadline, this front office used shrewd deals, free-agent signings, and the draft to put the final touches on a promising squad that wasn’t quite finished. And the impact of those moves was evident in Sunday’s domination of the Vikings: