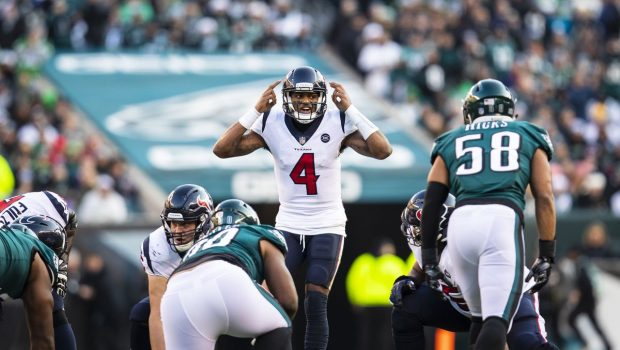 Even though Watson is under the cloud of almost two dozen accusations of sexual assault.

Watson has recently at Texans training camp, now nursing an apparent foot injury while all along harboring a desire to be traded out of town.

And the Eagles – long a team wishing to oblige him – may be closer than ever to closing the deal.

While an NFL source tells TexansDaily.com that nothing is “imminent,” CBSSports reports that talks are “heating up” between the Eagles and the Texans in a way that would send the beleaguered star QB to Philadelphia, with Houston landing a treasure chest in return from a Philly team in possession of three first-round picks in the 2022 NFL Draft.

In theory, the Birds also have the advantage of being able to offer the Texans Jalen Hurts in return, a young starting quarterback still on his rookie deal.

The Eagles aren’t the only team that can be in contention for Watson. Carolina, Denver and Miami have all been involved in the idea at some level, and Houston would like nothing better than to be at the hub of a bidding war for Watson, who is embroiled in controversy due to allegations of sexual misconduct.