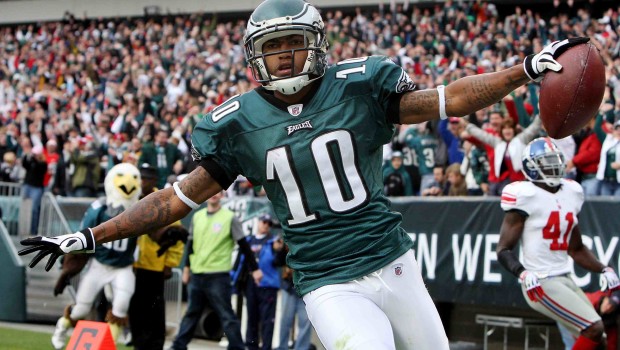 DeSean Jackson is back in South Philly, where he lit up the sky for six years before Chip Kelly cut him in 2014.

Jackson, who played his collegiate football at Cal, was selected by the Eagles in the second round (49th pick overall) of the 2008 NFL Draft, made three Pro Bowls appearances and three seasons of 1,000-plus receiving yards.

He then joined the Washington Redskins for three seasons and landed with the Buccaneers for two before returning to Philly through a March trade.

Eagles general manager Howie Roseman says that Jackson will always be remembered for what he does as an Eagle:

“I think the thing about DeSean is that, all of us need time sometimes to mature,” Roseman said on 94WIP. “He’s got a family, he’s got two kids, and he’s been here every day in the offseason program. He looks great. He’s excited about the opportunity and he knows his legacy is going to be defined in Philadelphia.”

Jackson is coming off of a 2018 in which he played just 12 games due to a thumb injury, hauling in 41 receptions for 774 yards and four touchdowns.

Over the last four seasons, Jackson has logged 1,000 yards just once, and he has not played a full 16-game campaign since his last season with the Eagles back in 2013.