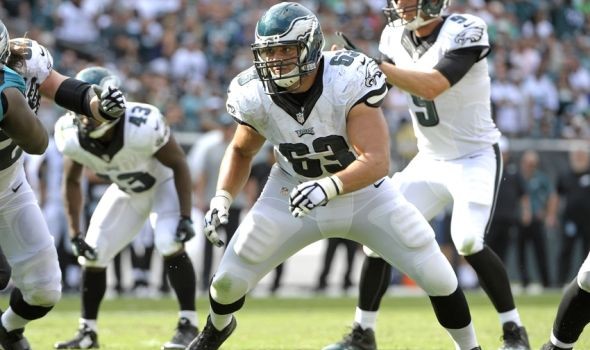 DEPTH OF THE OFFENSIVE LINE MAY BE EAGLES’ SALVATION

The Eagles have pulled off lots of great plays that have led to their 3-0, NFC East-leading record; the Birds have:

Come from behind to win all three, check.

Won all three without LeSean McCoy, the NFL’s 2013 rushing champion, being a significant contributor yet.

But lost in the noise is the play of the offensive line. Lane Johnson must sit out the 49ers game, the last of his four-game suspension. Evan Mathis has gone down with a knee injury, and may not be back as an effective lineman this season. Usually this kind of upheaval on the O-line would be disastrous, but they’ve kept rolling.

In last Sunday’s Redskins game, it got worse with All World center Jason Kelce sustaining a core muscle injury requiring surgery and putting him on the shelf for at least two months. Again, the Eagles kept scoring with these backups playing the rest of the game without Nick Foles getting taken off at the neck — though the Redskins certainly tried!

How is this happening, and can it be sustained?

Coach Chip Kelly says these guys can play and he expects them to step up and do the job.

Sunday in Santa Clara, David Molk (protecting Foles in photo above) will get his first NFL start at center, Matt Tobin will line up on the O-line and Kelly has said this week the play-calling will not change. Dennis Kelly and Andrew Gardner are two more reserves who have stepped in and played good enough to keep Foles clean and allow this scoring juggernaut continue.

Of all the new innovations that Kelly has integrated into the Eagles, and there are many — nutrition, sports science, etc. — the depth along the offensive line this season might be his smartest accomplishment in just his second season at the helm.