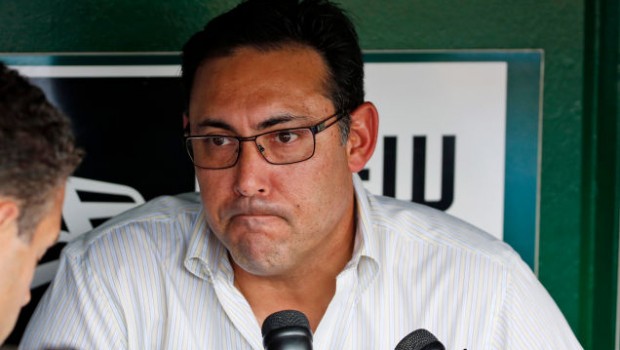 DELUSIONAL AMARO MEETS THE MEDIA AND EMBARRASSES HIMSELF

“I know things get blown out of proportion when you lose 19-3 and you have to have [outfielder] Jeff Francoeur finish off the game. But that doesn’t necessarily epitomize our season. That was one game that didn’t go well and we have to continue to concentrate on what we can do to continue to help these young players grow and hope that some of our veterans guys can turn things around.”

— Ruben Amaro Jr., explaining yesterday that the 19-3 loss to Baltimore doesn’t epitomize the Phils season when even Stevie Wonder could see that it does.

There are a lot of adjectives and adverbs to describe the woeful Ruben Amaro Jr., who in his general managership of the Phillies took over the team just after it played in the 2009 World Series and has driven the franchise down so far that the team is now hard to watch:

Insensitive, especially to fans, whose intelligence and knowledge of the game he questioned a couple of weeks ago.

It has been so bad lately for Amaro that he unexpectedly popped into the home dugout Wednesday afternoon at Citizens Bank Park to talk about it.

The Phillies entered Wednesday’s series opener against the Orioles with the worst record (22-44) in baseball. They have lost 18 of their last 21 games, and they just completed an 0-8 road trip, their first winless road trip of eight or more games since an 0-9 stretch in the team’s inaugural 1883 season.

“We knew that were not going to be necessarily challenging for the National League East title, but at the same time, we need to see improvement, and that’s what we expect,” Amaro said. “We’re not seeing it right now.”

Could changes be coming?

Possibly, but they do not seem imminent.

A CSNPhilly.com report earlier this week said longtime baseball executive Andy MacPhail, 63, is the organization’s top target to replace Phillies president Pat Gillick, who is not expected to remain in his position beyond the season. But until Gillick’s replacement is announced, he seems unlikely to make wholesale changes with the front office or coaching staff.

“I really don’t have any comment about that,” Amaro said about MacPhail’s possible arrival. “That’s not my area. That’s for people who are much higher than my pay grade.”

Could MacPhail’s arrival be bad for him?

“I’ll answer that the same I just answered the first question,” Amaro said.

But Amaro, whose contract expires at the end of the season, said he is “fully supportive” of Phillies manager Ryne Sandberg, and he expects Sandberg to finish the season.

Of course, it might not be entirely Amaro’s decision to make at this point. Sandberg said he isn’t worried about his job status.

“I worry about the game today and what has to be done today,” Sandberg said. “That’s the focus and the mindset for me.”

But the pressure certainly is on the Phillies, who are rebuilding for the future. They hope to trade Cole Hamels, Jonathan Papelbon, Aaron Harang and potentially others before the July 31 trade deadline in an effort to speed up the rebuilding process.

The Phillies’ intentions are known, but so far, they have not pulled the trigger.

There are reasons for that. The Phils might argue teams are low-balling them. Other teams might argue the Phillies are asking for too much.

“All I can say about that is people have their opinions,” Amaro said.

But if MacPhail is going to join the organization, a strong Trade Deadline performance might be Amaro’s best bet to save his job.

“I don’t worry about doing my job to save my job,” Amaro said. “I have to do my job well so this organization can get back on its feet and do the things that we need to do to be a perennial contender. That was the plan at the outset of this offseason. We were going to rebuild. We were not going to be a great ballclub. We were not going to be a contending team. We knew that. We know that we were going to take some lumps.

“I see a lot of positive things that are happening in our minor league system. There’s a lot of lights at the end of the tunnel for us.”