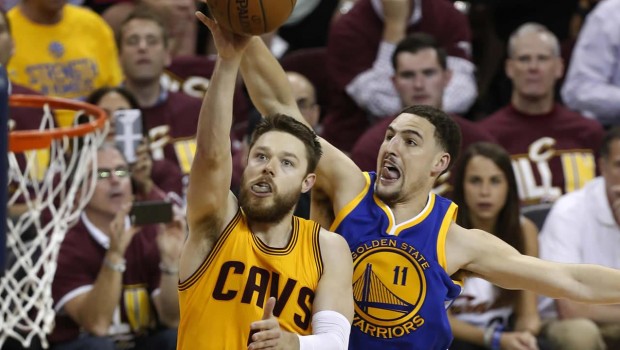 DOWN UNDER DELLY LIFTS THE BATTERED CAVS OVER WARRIORS

The Cleveland Cavaliers’ personality has always reflected that of the superb LeBron James.

But now that Kyrie Irving has join Kevin Love on the injured list, the Cavs are starting to reflect Matthew Dellavedova’s blue-collar defensive style that a Philly fan can appreciate.

Anyone who saw Dellavedova’s effort in the Cleveland Cavaliers’ 96-91 Game 3 NBA Finals victory over the Golden State Warriors Tuesday night will not find it surprising that the Cavs are they are taking on Dellavedova’s personality defensively.

James Jones, a 12-year veteran, and Mike Miller, in his 15th year, followed Dellavedova’s lead and dove on the floor for loose balls. In the first quarter, Iman Shumpert suffered an injury to his left shoulder, the same shoulder that was dislocated when the Cavs acquired him in a January trade from the Knicks. Yet Shumpert returned to the game and played 32 minutes.

The heart, grit and toughness shown by Dellavedova, undrafted out of St. Mary’s in 2014, has proved infectious.

“Delly’s the most Cleveland-like Australian I’ve ever met in my life,” Cavs coach David Blatt said. “And if you’re from Cleveland, you know what I’m talking about.”

Starting in place of Kyrie Irving, who underwent surgery for a fractured left kneecap Sunday, Dellavedova scored a career playoff-high 20 points, pulled down five rebounds and added four assists. But that line did not measure his impact in the final three minutes.

With the Cavs’ clinging to an 81-80 lead with the rallying Warriors in the midst of a 36-point fourth quarter, Delly came to the rescue.

The official play-by-play called it a 12-foot running bank shot, but that didn’t begin to describe the degree of difficulty of Dellavedova’s miracle basket with 2:27 remaining.

Defended by Klay Thompson, he nearly lost the ball at the top of the key. He stumbled down the lane and with his right hand heaved up a shot that banked in and left him flat on his back. Fouled by Stephen Curry, Dellavedova made the free throw for an 84-80 lead.

“That was a huge turning point,” Curry said. “We were down 17 going into the fourth, bring it all the way back to one. I tried to get out of the way. I don’t know if I hit him or not, but he makes a great play off the backboard.

“We still had a chance to win, regardless of that play. But it was a good turning point for him to get the crowd back into it. They obviously love the way he plays. He made some timely buckets and that was one of them.”

Thompson said of Dellavedova’s circus shot, “That was just lucky, man. I guarantee he doesn’t practice that shot. It was a good play, though.”

“It’s not something that he’s throwing up. This is a dude who gets in the gym and works on everything,” Shumpert said. “From the floaters to the one-foot three he shot, he’s got to work on it every single day. He’s one of those guys who comes early and leaves late.

“He will leave it all on the floor, dives on the floor every single play, gets cut in the face, elbowed, scratched and keeps on fighting. He’s a great teammate to have.”

In the final 30 seconds, Dellavedova and Thompson had another run-in that proved crucial.

They were involved in a replay review with 17.5 seconds remaining prompted by Dellavedova and Thompson fighting for a loose ball on the sideline. The public address announcer first called it an inadvertent whistle, then the Warriors were awarded the ball. But the play was reviewed and overturned, giving the Cavs possession.

“That was the right call, we looked at the replay,” Warriors coach Steve Kerr said. “Klay had his hand on the ball when he was out of bounds.”

Dellavedova played 39 minutes. In three home games since the start of the Eastern Conference Finals, he’s averaged 15.7 points, 3.3 rebounds and 2.3 assists in 33.3 minutes.

“The guys love Delly because he plays with all his heart and he cares first about the team and only about the team,” Cavs coach David Blatt said. “Whether he’s playing nine minutes or 40 minutes, he’s going to give you everything (he) has. What’s not to love about the guy?

“I tell you what, his biggest fan is sitting home right now, Kyrie Irving. Loves the guy. And he knows why, and we know why.”

James has praised Dellavedova repeatedly in the playoffs.

“I know one thing I’m going to count on Delly is how hard he’s going to play,” James said. “He’s going to throw his body all over the place. He’s going to compete at a high level however many minutes he’s out on the floor. It was great to have someone like that who was willing to sacrifice everything for the better of the team.”

The Warriors’ David Lee found out what it was like to dive and scramble with Dellavedova when they went after a Curry turnover. Lee fouled Dellavedova in the process and Dellavedova made two free throws for a 90-83 lead with 51.9 seconds remaining.

“He was about two steps closer, he dove about a half second before I did,” Lee said. “He’s a guy that’s low to the ground and isn’t afraid to put his nose in there. I think he’s done some good things for them in these last two games.”

Ironically, Lee said Dellavedova’s hustle inspired the Warriors as much as it did the Cavs.

“To end the game, we really stepped up our physicality and our hustle, and that’s what it’s going to take,” Lee said. “So while he’s done some good things, we showed some signs early in that last quarter of matching his intensity and their intensity. We’ve just got to continue that from the start the next game.”

— Ohio.com contributed to this report.