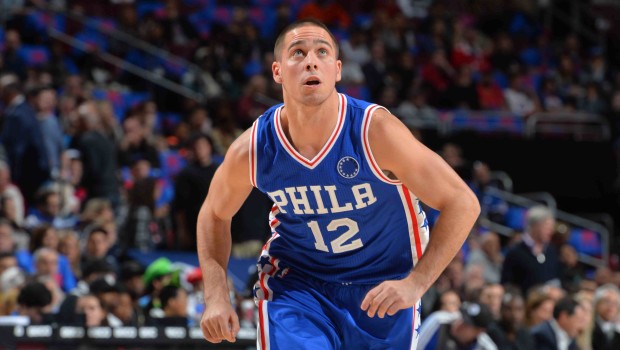 Jack McCaffery of the Delaware County Daily Times writes this, presumably with a straight face:

Simmons is 6-10; McConnell (above) is 6-2. Simmons was the consensus No. 1 overall draft choice; McConnell was an NBA walk-on. McConnell has remarkable court vision; Simmons has shown glimpses of legendary court vision.

But while McConnell is not a special shooter, Simmons has some kind of outside-shooting phobia. And McConnell battles, while Simmons bolted school before LSU could consider an NIT invitation, then sat out an entire season with an injury that should have taken three or four months to heal. And McConnell was sixth in the NBA in steals last season, eighth in assists and a proven end-of-the-game handful for opponents. Can Simmons duplicate that?