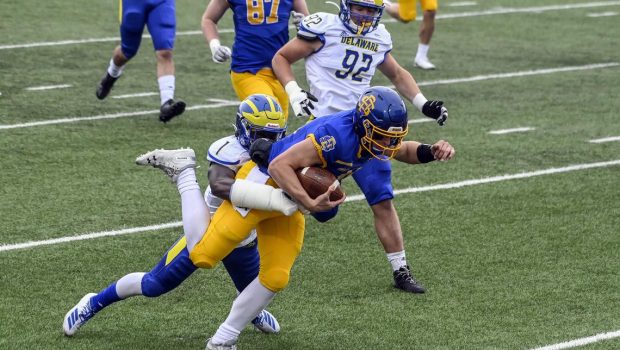 DELAWARE SCORES 1ST BEFORE GETTING BLOWN AWAY IN FCS SEMIS!

After reaching the FCS Semifinals for the first time in a decade, Delaware was pounded 33-3 by of No. 1 South Dakota State, 33-3 in Brookings, SD. Redshirt junior Nolan Henderson completed his first 11 pass attempts before finally having an incompletion on a ball he was forced to throw away and finished the game 18-of-21 for 142 yards. Senior Gene Coleman II made six catches for 43 yards, going over 1,000 receiving yards in his Delaware career to become the 31 st player in program history to achieve the feat. The Blue Hens were able to strike first when sophomore Ryan Coe connected on a 29-yard field goal before South Dakota State was able to score on its next three possessions to take control of the game. Delaware controlled the ball for the majority of the contest, holding possession for 37:05. The Jackrabbits were able to create 12 tackles for loss to limit the production. Defensively, redshirt sophomore Noah Plack led the way with six tackles for the Blue Hens while classmate Liam Trainer followed with four, including a tackle for loss.