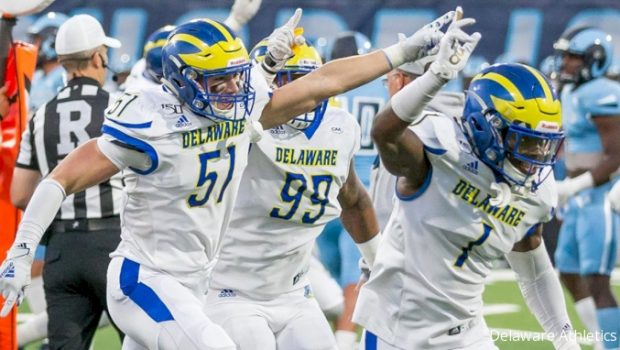 DELAWARE RALLIES TO TOP PENN 28-27 IN A THRILLER!

Nolan Henderson threw three touchdown passes and Delaware scored 21 consecutive points in the second half to rally past Penn 28-27.

The Blue Hens (FCS No. 20) trailed 21-7 in the third quarter, then held on after Penn’s Isaiah Malcome scored on a 69-yard punt return to make the score 28-27. Nick Robinson’s pass for the 2-point conversion and the lead was incomplete.

Robinson completed 18 of 27 passes for 193 yards with three touchdowns and an interception. Karekin Brooks carried 28 times for 158 yards for the Quakers (0-1) and Malcome had nine carries for 73 yards.