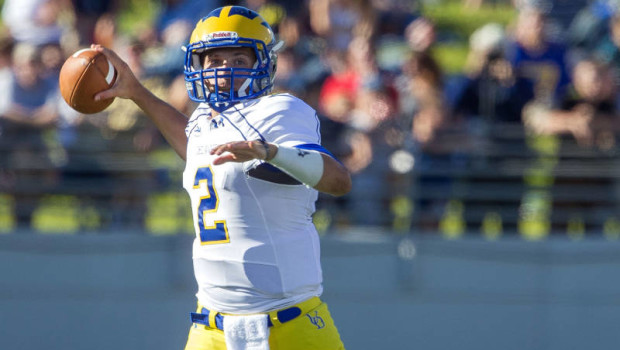 DELAWARE WILL NEED TO RING UP THE POINTS IN 2014

In 2013, Dave Brock delivered a winner in his first season with wins over James Madison and an improbable last-second victory over national runner-up Towson. Then came a 35-34 season-ending loss to Villanova in which the Wildcats outscored Delaware 23-0 in the final 8:01 likely kept the Hens out of the playoffs.

Improving the Blue Hen defense is the No. 1 priority as Delaware set school records for yards and points allowed in 2013. To help the cause, Brock named defensive line coach Dennis Dottin-Carter as co-defensive coordinator along with Tim Weaver this season. The good news is that there is plenty of talent at the offensive skill positions, but third-year starting quarterback Trent Hurley (photo above) will have to work behind an inexperienced line.

Strengths:
With quarterback Trent Hurley, wide receiver Michael Johnson and tight end Nick Boyle returning, the Hens should have firepower. Hurley, a transfer from Bowling Green, was the CAA’s passing ratings leader last year. Meanwhile, Johnson was second in the CAA in all-purpose yards and had 60 receptions. Boyle had 42 receptions and is expected to be one of the top tight ends in the league. The Hens might not have to punt much, but if they do, they can count on one of the nation’s best. Eric Enderson had a 45.0 yard average last year as he shattered Delaware’s school record. He led the CAA in punting and was third nationwide. Enderson had 22 punts over 50 yards. No other CAA punter had more than 13. The secondary should be aided by the return of safety Jake Giusti, who missed most of the 2013 season with a knee injury. Giusti is the only remaining Blue Hen from the 2010 national runner-up team that fell to Eastern Washington in the championship. The defensive line will feature Laith Wallschleger and Derrick Saulsberry.

Weaknesses:
A staple for what seems an eternity, running back Andrew Pierce is gone. A two-time All-American, Pierce led Delaware in rushing all four of his seasons and finished with a school record 930 carries for 4,459 yards, good enough for second on the all-time list. The Hens also must replace All-American defensive tackle Zach Kerr, offensive tackle Erie Ladson and cornerback Travis Hawkins. Besides Ladson, Delaware must replace guard Bobby Kennedy who started the final 21 games and center Brandon Heath, a three-year starter. How an inexperienced offensive line fares could go a long way in determining the Hens’ fate. The other concern rests with the pass defense. Last year, the Hens were torched and that’s putting it nicely. The final two games against Richmond and Villanova were particularly painful.

The Bottom Line:
This is a big season for the Hens. Since the NCAA instituted postseason championship play for its lower-division football members in 1973, Delaware has never missed the playoffs four straight years. It’s in jeopardy of doing so this season. The Hens were picked to finish sixth in the CAA preseason poll, but Delaware faithful are hoping for better than that. It won’t be easy as they visit Pittsburgh in the opener that has had fans talking since the game was announced a few years ago. Delaware’s only foray with FBS teams in recent years has been against Navy or Maryland so a new FBS opponent has brought a lot of interest. Two key early season games come on September 13th at home against Colgate and on the road (Sept. 27) at James Madison. If the Hens are even going to think about the playoffs, those two games are must-wins. They catch a break as they don’t meet Richmond or Maine, but the defense has to be better than last year. Hurley and company should put up points, but if the defense gives up 40, it might not matter.