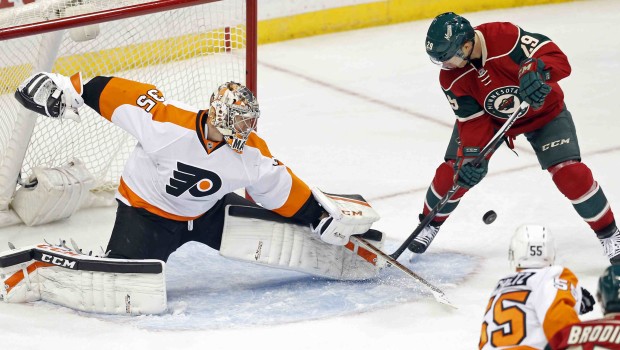 Thanks to Michael Del Zotto, the Flyers flew home last night on the wings of a rare road win.

Defenseman Del Zotto scored his second goal of the game – and just his third of the season – with 37 seconds left in overtime to send the Flyers to a 4-3 win over the Minnesota Wild.

Sean Couturier scored his fifth goal in nine games and Ryan White also scored to help Philadelphia win its second straight after losing three in a row on its road trip to Anaheim, San Jose and Los Angeles.

”We thought we were playing some pretty good road hockey even before the Christmas break happened; then we went out to California,” said forward Brayden Schenn, who had two assists. ”It’s something we’ve got to establish. Obviously you’ve got to win lots of games here on this road trip and on the road in the second half to be successful.”

Steve Mason (above) made 31 saves for the Flyers, who are 17-15-7 this season and just 8-10-3 on the road. They’ve played seven of their last 11 games on the road, but following this one-game trip to Minnesota, Philly returns home for a three-game homestand.

The Flyers entered with the league’s second-worst offense at 2.19 goals per game.

Del Zotto and White scored 52 seconds apart in the second period for a two-goal lead. Del Zotto ended the game in overtime on a one-timer from Jakub Voracek. He hadn’t scored since Nov. 27, a span of 13 games.

”I haven’t had a ton of bounces go in for me or anything like that, so it was nice to be able to contribute offensively and help the team win in that department,” Del Zotto said.

Zucker scored unassisted on a breakaway with 4:02 left in the second. The Wild then outshot Philly 13-6 in the third.

”I think it showed the second half of the game that it’s all mental,” Yeo said. ”Once we addressed it, the guys, I thought, started to feed off each other’s energy. It takes a lot of character to come back with the schedule that we’ve had.”