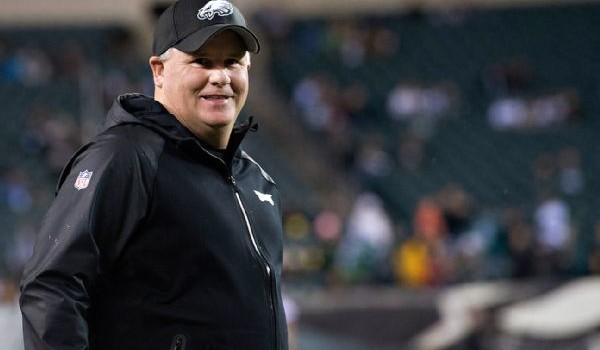 THE DEIFICATION OF CHIP KELLY IS GETTING RIDICULOUS

So, the New York Post has provided a Top 50 list of the Most Fascinating People in the NFL, and guess who is No. 1.

None other than our own Eagles coach Chip Kelly, whose deification this year is in stark contrast to most NFL grid-heads last year who thought he wouldn’t make it as an NFL coach.

Here are the Philly-centric selections:

1. Chip Kelly, coach, Eagles – He’s smart, funny, brash and unconventional, and has seemingly half the NFL ready to copy his innovative offense, pace and training methods. Kelly remains a breath of fresh air in an otherwise stodgy profession that abhors risk.

25. DeSean Jackson, wide receiver, Redskins – He was already interesting, but when you throw in some good, old-fashioned mystery, Jackson becomes downright riveting. Why did the Eagles just up and cut a Pro Bowl wide receiver coming off an 82-catch, 1,300-yard season? We might never know, which is irresistible.

35. Andy Reid, coach, Chiefs – Forget the gut and the walrus mustache. His time-management “skills” with the clock winding down alone are worth tuning in on a regular basis, though Eagles fans might disagree. That and his stubborn devotion to throwing the ball on every down are high comedy.

38. LeSean McCoy, running back, Eagles – He might have eclipsed Adrian Peterson as the NFL’s best running back and will say anything to anyone anywhere at any time. A great player and great copy.

48. Michael Vick, quarterback, Jets – He’s long past his prime at age 33 and relegated to backup duty in New York after being a starter in Philly, but Vick will be a lightning rod for as long as he plays because of the dog-fighting scandal. It’s impossible not to have an opinion on the guy.