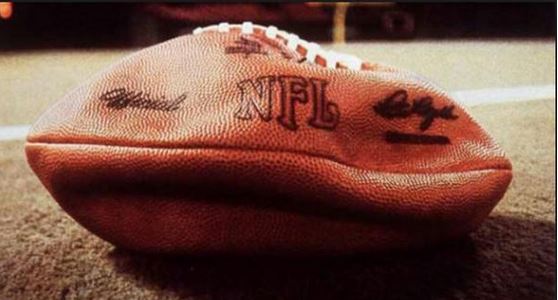 DEFLATEGATE SHOWS HOW THE NFL IS OUR NATIONAL OBSESSION

If you don’t think the NFL and the run up to the Super Bowl aren’t the biggest story in this NFL-obsessed country — bigger than Yemen, ISIS, the plunging unemployment rate, sub-$2-a-gallon gas — check out what the three broadcast networks led their evening news shows with yesterday: Deflategate is a lot more than just a football story even if it is a minor blip compared to Spygate.

Four days after the AFC championship game, the question of whether the Patriots illegally deflated footballs is still the most talked-about story in America. In fact, all three broadcast networks led their evening newscasts with the story.

The NBC Nightly News began like this: “On our broadcast tonight, full denial from Patriots quarterback Tom Brady and from his coach, as a football inflation scandal remains bigger than the upcoming Super Bowl, as the question remains: Who or what was responsible?”

The CBS Evening News began like this: “Tonight, caught in a pressure cooker: Is Tom Brady a cheater? Quarterback Tom Brady responds to reports that the Patriots used deflated footballs in the AFC Championship Game.”

And ABC World News Tonight began with, “On this Thursday night, the breaking news, the scandal before the Super Bowl. The star quarterback, Tom Brady, answering the question: Are you a cheater? Tonight, how Brady explains those deflated footballs, who handled them after they were handled by the refs, and what now for the football star with the supermodel wife?”

As Brian Williams said during the NBC broadcast, “If baseball is our national pastime, football is something closer to an obsession.” Across America, people are obsessed with Deflategate.