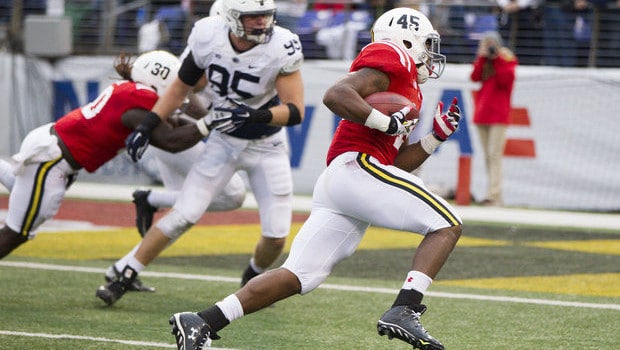 All American to be Carl Nassib (95 above) saved the day for Penn State in yesterday’s 31-30 victory over Maryland.

The 6-7, 272-pound defensive end came through when it counted, and turned back the underdog Terps (2-5, 0-3), who had plenty of chances to upset coach James Franklin’s Lions.

On a day when Lions’ quarterback Christian Hackenberg was productive (13 of 29, 315 yards, three TDs) and Chris Godwin was too (four catches, 135 yards, TD), it was the defense that had to nail down PSU’s victory.

But Nassib and the defense found a way to finish.

And there was a play Nassib made in the fourth quarter, a play that typifies his relentless nature, that won’t show up on the highlight shows.

“He’s runs and pursues the ball like his hair’s on fire.” — PSU LB Jason Cabinda said about Nassib.

With just over eight minutes left, PSU was nursing its 31-30 lead and Maryland faced a third and eight from its 30. Terps dual-threat quarterback Perry Hills dropped back and found 5-11, 185-pound wideout Malcolm Culmer underneath for a catch-and-run completion.

Culmer began working right to left and had a path to get past the first-down marker, at the very least, and extend the Maryland drive.

And then suddenly Culmer didn’t have a path.

Because Nassib, rushing from his left defensive end post, peeled back and flew across the field to catch the wideout from behind, limiting Culmer to a six-yard gain.

PSU defensive back Trevor Williams intercepted a Hills’ deep fourth-down throw on the next play and Maryland would get no closer than the PSU 40 the rest of the way.

Nassib, who finished with two tackles for loss, would later trip up another Terps possession with a five-yard sack of Hills.

And Nassib, the midseason All-American rush end who has 17.5 tackles for loss, 12.5 sacks, five forced fumbles and an interception in eight games, helped turn the game with a different kind of play.

“He’s another guy with a huge motor,” Penn State linebacker Troy Reeder said of Nassib, a role player in 2013 and 2014.

“He’s somebody who makes big plays consistently when it’s needed the most. As a senior, as the type of leader that he is, it was awesome to see him step up, and that’s what we expect from him.”

“They push him around, he’s right back out there pursuing the football at all times.

“He’s runs and pursues the ball like his hair’s on fire. That’s kinda how he’s always been.”