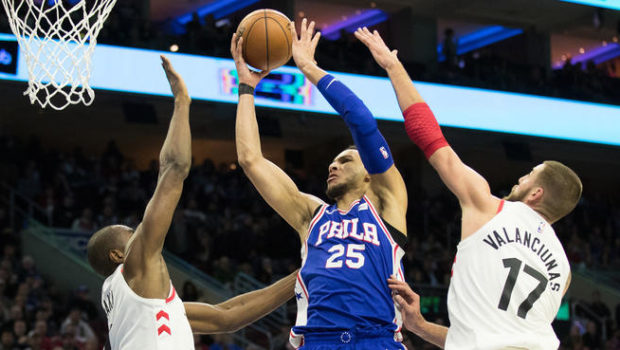 DeMar DeRozan scored a career-high 45 points and the Toronto Raptors overcame a 22-point deficit to beat the Sixers 114-109.

DeRozan, a career 28 percent shooter from 3-point range, set a career high with six 3s in nine attempts in Toronto’s fifth straight win. His jumper with 4:13 left put the Raptors ahead to stay after they trailed 76-54 early in the third quarter.

He hit two free throws with 53 seconds left after Robert Covington missed a go-ahead 3-point attempt, and then two more with 6.4 seconds left put it away.

DeRozan finished 13 of 15 from the line to best the 43 points he scored against Boston last season. The Sixers only took 14 free throws as a team.

Ben Simmons (above) scored 20 points but had seven of the Sixers’ 23 turnovers in their fourth straight loss. Covington added 19 points and Dario Saric had 18 points, 10 rebounds and nine assists.

The Sixers, who blew a 16-point lead Tuesday night in a loss to Sacramento, fell to 1-7 without Joel Embiid.

Embiid missed two games with back tightness after logging a career-high 49 minutes in a triple-overtime loss to Oklahoma City last Friday. But the big man participated in shootaround and coach Brett Brown said less than two hours before tipoff that Embiid was “probable” and would play barring a setback in warmups.

Embiid didn’t show any discomfort during pregame drills, but was ruled out about 30 minutes before tipoff.

“He felt OK in the morning and then half an hour before the game, we learned he didn’t feel comfortable playing.” Brown said. “So we decided to rest him again.”

0 thoughts on “DEFENSELESS WITHOUT JOJO, SIXERS CRUMBLE TO RAPTORS 114-109!”