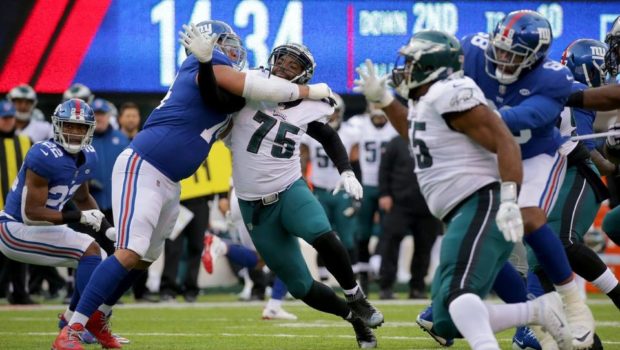 If you’re a lifelong member of Eagles Nation, you are sky-high after the Birds’ 34-29 win over the Giants yesterday that locked up a first-round bye.

Because the defense really sucked!

What had been one of the better defensive teams in the NFL this year, ranking third in defensive DVOA coming into yesterday’s game, melted down early on, allowing 504 yards to the Giants, by far the highest total it’s given up all year. It was also the lowly Giants’ best performance of the season in both points and yards.

It’s not an encouraging sign when a defense gives up a 67-yard touchdown to Sterling Shepard!

The defense clamped down after halftime, allowing just six points in the second half. That half is probably more indicative of the Philly defense than the first one, but it still represents the way the game changes for the Eagles without Wentz.

Foles may have been flawless in the red zone, but the Eagles still went three-and-out three times, adding another punt and a turnover on downs.

With Wentz, maybe one of those failed drives ends in points instead, and the Eagles put away with Giants by more than a single score. With Foles, the team can still get the job done, but the margins—as was evident against a team that has been horrific and already fired its head coach—appear to be much slimmer.