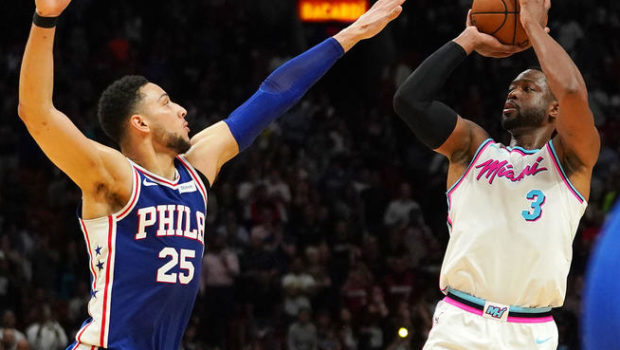 Dwyane Wade scored 15 of Miami’s final 17 points, finished with a season-high 27 and his jumper with 5.9 seconds left lifted the Heat to a 102-101 victory over the visiting Sixers.

Goran Dragic scored 21 for the Heat, who got 16 points from Tyler Johnson and 15 points and 11 rebounds from Hassan Whiteside.

Joel Embiid scored 23 points for the Sixers, who got 21 from Dario Saric. The 76ers led by as many as 10 in the fourth and had a chance to win at the buzzer, but JJ Redick’s wide-open 3-point try bounced off the rim.

“D-Wade down the stretch was amazing,” Redick said.

Wade got fouled on a 3-point try with 29 seconds left and the Heat down by three. The plan was for the Heat to foul Simmons — a 57 percent foul shooter — if Wade missed one of the three foul shots. Wade made all three, but fouled Simmons anyway.

Wade didn’t seem aware of the plan to foul only if he missed one of the three.

“I wanted to foul,” Wade said. “I had confidence in myself that I was going to make all three. They kept running (the same) pick and roll, and it was killing us and I just felt playing the numbers … I wanted the young fella to see, in this environment, what he’s going to do.”

Simmons missed the first, made the second. Wade brought the ball downcourt, dribbled left, went behind his back, then to the right, then eventually found his spot to fire over Simmons for what became the gamewinner.

“That’s what he does,” 76ers coach Brett Brown said. “That’s who he is. That’s who he’s always been. He just sort of grabbed the team and put it on his back.”

The Sixers started with a 16-3 run to open a 33-20 lead in the first half, and Miami answered with an 18-2 run to go up 38-35. From there, a 12-minute stretch of back-and-forth commenced with neither team ever leading by more than three.

The 76ers eventually broke through, going up nine late in the third. But they saw the margin cut to 75-73 going into the fourth, after Wade hit a step-back 3 to end the quarter. In the fourth, the Sixers went up again, this time by 10 — and Miami clawed back again, using an 11-1 run to knot the game on a layup by Wade with 4:57 left.