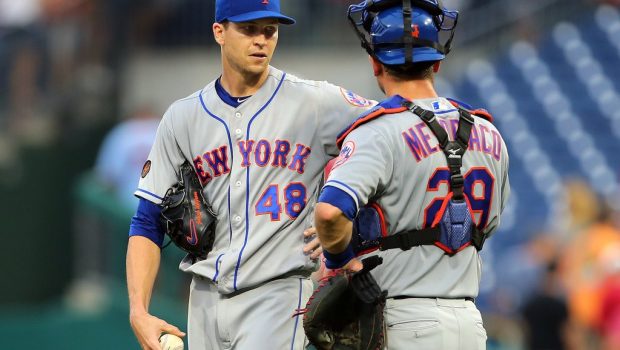 Jacob deGrom lowered his MLB-leading ERA to 1.71 and pitched the visiting Mets over the Phillies 3-1.

DeGrom (8-7) allowed only an unearned run, the result of his own error, walked none, struck out nine and threw his hardest pitch, a 99-mile-per-hour fastball, on the next to last of his 108 pitches.

The right-handed deGrom has thrown three complete games in 132 starts in the majors. He threw a one-hitter at Citizens Bank Park on July 17, 2016, in a 5-0 victory over the Phillies.

It appeared that deGrom’s day might be cut short by a 41-minute rain delay that began in the middle of the fourth, but he came back as strong as before the delay.

DeGrom allowed a leadoff single to Rhys Hoskins in the fourth and then retired nine of 10 before the seventh, in which the Phils got their lone run.

DeGrom, a two-time All-Star, allowed three runs or fewer in a 22nd consecutive start, two starts behind Dwight Gooden’s club record. He also surpassed 200 strikeouts for the season, finishing the game with 204.

Hoskins and Maikel Franco each had a single and a double for the Phillies, who began the day half a game behind Atlanta in the NL East and leading the NL wild-card race.

Jake Arrieta (9-8) allowed one run on four hits with six strikeouts and no walks in six strong innings.

The Mets went ahead in the fourth when Jeff McNeil scored from third on a single by Wilmer Flores. They took a 3-0 lead in the seventh with two runs off Luis Garcia. Devin Mesoraco homered and Amed Rosario scored on McNeil’s first career triple.