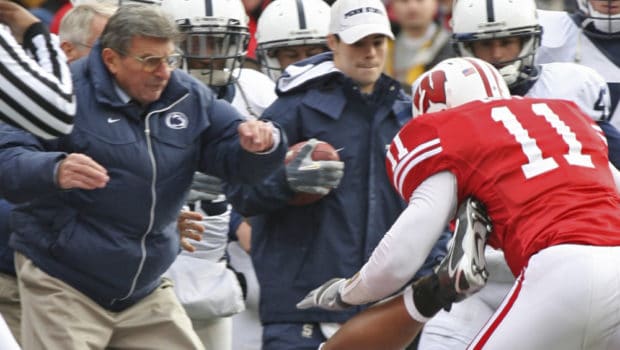 Mark this story down as the most bizarre of the day.

Now, the Detroit Lions linebacker said it was his “proudest moment in college” in a recent story in Men’s Journal.

Levy, who has taken on domestic violence and sexual assault as causes he is trying to fight, called Paterno a “dirtbag” for reportedly being aware of sexual abuse allegations against his former defensive coordinator Jerry Sandusky.

“That dirtbag, man,” Levy told Men’s Journal. “We’ve gotta stop prioritizing sports over humanity. Just because somebody can throw a football or coach football, they’re excluded from their wicked acts.”

Levy has increased his profile speaking out against sexual assault on college campuses with an essay in The Players’ Tribune and then raising money for the Enough SAID campaign in Detroit to help test neglected rape kits and fund an investigator to try and get convictions.

After his essay this spring in The Player’s Tribune, Levy said he heard from victims of sexual assault often. They would share their stories with him and he realized he was on a path to being a male voice for them.

“It was a weird feeling, man,” Levy told ESPN last month. “I felt so emotionally moved by people telling me things that happened to them, and that was enough in its own, but that also kind of played in and fueled into what I thought. There was a need for a male voice, and it reaffirmed my thought, reaffirmed the feeling I had.

“So I said, ‘OK, this is important, DeAndre. Stand behind it.’ I wasn’t thinking of anything else other than I needed to say something, you know, because men, we’re failing, man. We’re failing.”

Lions coach Jim Caldwell, who coached under Paterno at Penn State, has often called Paterno a mentor and expressed how important he was in his life. Caldwell said his players are allowed to have whatever opinion they want.

“Really, I think I’ve gone on record many times about how I feel about Joe,” Caldwell said. “And in regard to our players making their statement about how they feel, I’d be hypocritical to tell you anything other than the fact that they can express their opinion.

“We don’t all necessary agree with it.”