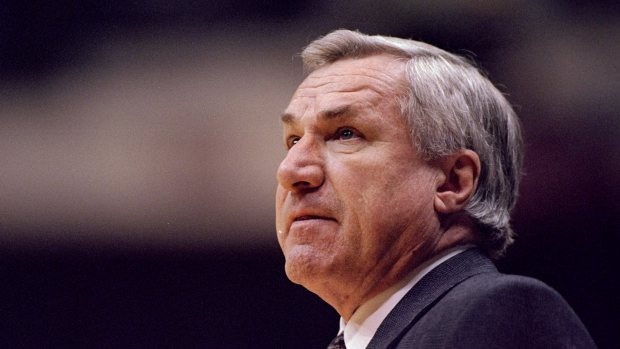 This was 34 years ago — March 30, 1981 — and a bunch of us were huddling in the press room at the Spectrum, watching television.

President Reagan had been shot that afternoon outside a hotel in Washington, and his condition was unknown to the sports reporters gathered. In fact, to the whole world. But especially to the lords of the NCAA and NBC, who were preparing to play and telecast the Indiana-North Carolina game for the NCAA basketball title.

There was real doubt that the game would be played if the president’s condition had worsened or if, God forbid, he had died.

At about 7:30 a fidgety, elegant man entered the room, and everyone shut up.

He placed his right hand over his mouth as he watched for a minute or two, and then left the room as he muttered, “Awful.”

Dean Smith, Carolina’s coach and a liberal Democrat, expressed to most of us that what really mattered was the life of our president — who happened to be a conservative Republican — not some silly basketball game.

It was Smith’s sixth trip to the Final Four without a crown and some of us wondered if he would ever win one.

Of course, the following year a freshman named Michael Jordan would sink an 18-footer that made the difference in Carolina’s 63-62 championship game victory over Georgetown.

He died yesterday at the age of 83, and most people will remember him as one of the greatest college coaches in history — at least in the top five.

I’ll remember him for that night in the Spectrum press room when he put the NCAA championship game into perspective.