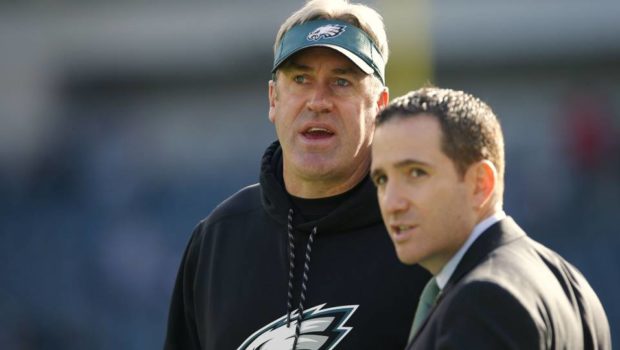 I WAS DEAD WRONG: HATS OFF TO EAGLES’ HOWIE ROSEMAN, WHO SHOULD BE THE NFL’S EXECUTIVE OF THE YEAR!

Nobody has been tougher on Eagles big boss Howie Rose than I have.

He seemed to be owner Jeff Lurie’s glove puppet, and his draft choices and nerd-like demeanor made my teeth hurt.

Little Howie was my name for him.

Then Chip Kelly was fired, Roseman was reinstalled at the top of the Eagles’ management chart and good things began happening.

Starting with the trade that brought the rights to draft Carson Wentz to Philly.

Roseman was master of the 2017 offseason, acquiring Timmy Jernigan and Alshon Jeffery, not to mention LeGarrette Blount. And the 2017 draft was first-rate.

So I am eating crow, and I find myself agreeing with this piece from the Sporting News, touting Howie for NFL executive of the year:

Roseman, meanwhile, has gone from that hot seat to the catbird seat. He is my choice for midseason NFL Executive of the Year.

More important to Roseman is that his Eagles can virtually clinch the NFC East after just 10 games with a win Sunday night at Dallas, which would put them four games ahead of the Cowboys with six to play.

The Eagles will catch the Cowboys in a vulnerable position this week due to the absence of Ezekiel Elliott. Even if All-Pro left tackle Tyron Smith returns from his groin injury, he may be limited. After Smith’s replacements gave up six sacks to the Falcons’ Adrian Clayborn alone last week, the Cowboys better hope Smith returns against a solid Eagles defensive line: