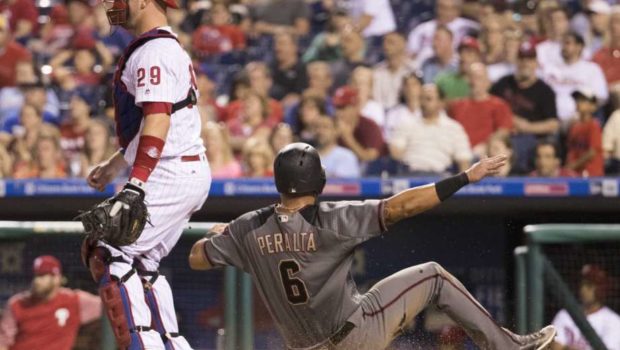 Gregor Blanco hit a tying two-run homer in the seventh and Jake Lamb drove in the go-ahead run with a sacrifice fly to rally the Arizona Diamondbacks to a 5-4 victory over the Phillies.

Blanco’s 23rd career homer — and second this season — against Aaron Nola (3-5) had an estimated distance of 424 feet into the concourse in right field.

Pinch-hitter Jeremy Hazelbaker starter off the seventh with an infield single, and Blanco followed with his tying shot on a 2-2 pitch.

Odubel Herrera had two hits and scored twice for the Phillies, and Maikel Franco drove in two runs.

The Phillies had a chance to tie it again in the bottom of the seventh when reliever Andrew Chafin put two runners on with two walks sandwiched around a sacrifice. He then struck out Herrera and Archie Bradley fanned Howie Kendrick.

Nola gave was charged with all five runs and nine hits — eight singles — in six-plus innings. He walked two and struck out six.

Arizona scored twice in the fourth to take a 2-0 lead. With runners on first and second, Phillies third baseman Franco bobbled an easy double-play ball and was only able to secure one out with the runners advancing. Daniel Descalsofollowed with a run-scoring grounder and Jeff Mathis had an RBI single.

Kendrick had an RBI grounder in the bottom of the inning to pull the Phillies within one, and Cameron Rupp hoomerd to tie the score in the fifth with his fifth of the season.