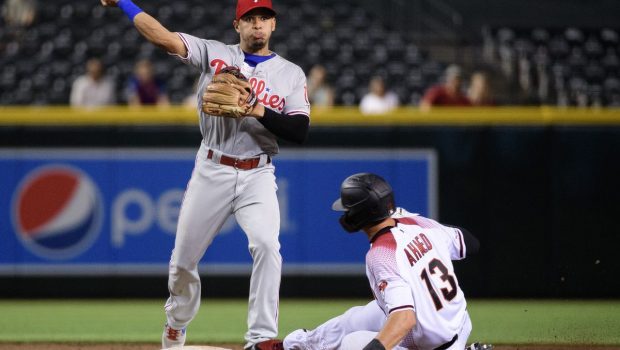 It would be simplistic to say that the Phillies postseason hopes are dying in the desert.

But what else can you say about a team that lost 6-1 to the Arizona Diamondbacks last night to fall into a tie for the second wild card spot with the Milwaukee Brewers?

But you get my point.

The Phils are going nowhere fast.

Gallen (2-3) allowed only a single to Jean Segura in the second while walking three and striking out six. The 24-year-old, acquired from the Miami Marlins for touted shortstop prospect Jazz Chisholm last week, was pulled after 85 pitches.

T.J. McFarland, Yoshihisa Hirano and Andrew Chafin each pitched scoreless innings before Bryce Harper hit his 20th home run of the season, a one-out shot to the opposite field off rookie Kevin Ginkel in the ninth.

Marte went 2-for-3 with a walk and hit-by-pitch, reaching base each time after falling behind 0-2 in the count. He scored once, drove in a run and stole a base as the D-backs won the rubber match of the three-game series.

The Phillies had five hits and didn’t get a runner past second base until Harper’s homer.

Arizona turned three double plays, two behind Gallen, who helped himself with two sacrifice bunts, including one in the fourth inning that drove in a run.

David Peralta drove in the Diamondbacks’ first run after Arizona took advantage of a hit-by-pitch and a walk in the third inning off Jason Vargas (6-6). Peralta singled to knock in Carson Kelly with one out, moving Marte to third. Marte sped home on Eduardo Escobar’s shallow fly ball to center.

In the fourth inning, three consecutive one-out singles gave Arizona a 3-0 lead. Nick Ahmed then scored from third on Gallen’s sacrifice bunt by sneaking in and taking off for home after third baseman Scott Kingery fielded the ball and threw to first.

Vargas, making his second start for the Phillies after coming over in a trade from the New York Mets, gave up four runs, four hits and three walks in five innings. He hit two batters and struck out one.