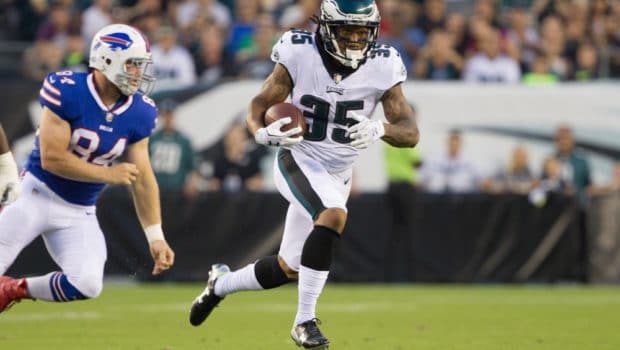 DARBY’S AN UPPER! EAGLES WELCOME REHABBED CB BACK TO PRACTICE

Eagles cornerback Ronald Darby, who has been out since he dislocated his ankle in the season-opening win at Washington, returned to practice yesterday with the first-team defense.

And he plans to play next Sunday night in the prime-time showdown at the Dallas Cowboys.

“I just know they’re going to be there to push me. I’ve got some shoes to fill in coming out there with them. They’ve been holding it down since Week 1. I’m going to go out there and give it my all,” Darby told the Eagles web site.

Darby was acquired in a trade with the Buffalo Bills in the middle of the preseason. Darby played sparingly in two exhibition games – he did notch an interception against his former squad – then just 18 snaps in Week 1. He said that the players and coaches have been on him in the meeting room to make sure he keeps up with this new defensive scheme.

“I haven’t been on a team like this in a long time since Florida State, just how they fly to the ball,” Darby said. “You watch film, on one play there will be like eight people on the tackle. You barely see that in the league.”

“You can go out there and run as many sprints you want, but football shape is a different type of shape,” Darby said.

Darby admitted to watching video of the injury when it first occurred. He’s just glad that he’ll be able to help this team down the stretch.

“I got down on myself being out there, hurt. I’m just happy to be back but I wanted to be out there every week,” Darby said.