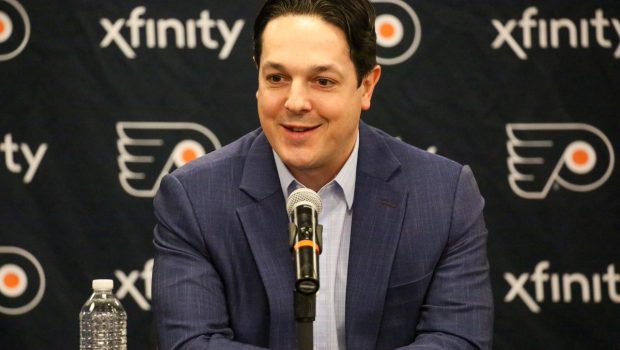 The Flyers rolled out Danny Briere as special assistant to the general manager.

Too bad he can’t still play because this sorry bunch could use him on the ice no tin the office.

According to the Flyers:

The 44-year-old Briere will be involved in all aspects of the club’s hockey operations including scouting and player development. He joins the Flyers hockey operations staff after parts of five years with the Maine Mariners of the ECHL, most recently as the President and Governor of the team.

In addition to his duties with Maine, he has worked in the Flyers player development department for the last two seasons in a part-time role working with the club’s prospects, as well as current players, both on and off the ice. He also spent two seasons in the Flyers front office business operations prior to joining the Mariners.

Briere spent six seasons as a member of the Flyers after he signed an eight-year contract as a free agent on July 1, 2007. He recorded 124 goals and 159 assists for 283 points in 364 regular season games.

He is also known as one of the Flyers all-time best playoff performers with over a point-per-game pace with 72 points (37g-35a) in 68 Stanley Cup Playoff games. His 1.06 playoff points per-game are third in Flyers history among players who have played 10 or more games, and he ranks second in franchise history for the most game-winning goals in the playoffs (9), one behind Rick MacLeish (10).

In 2009-10, Briere led the Flyers during their run to the Stanley Cup Final. He led all players in the postseason with 30 points in 23 games, which also set a new franchise record for most points in a single postseason.

Watch live as Daniel Briere meets with the media after being named Special Assistant to the General Manager. https://t.co/4L3v99TJju