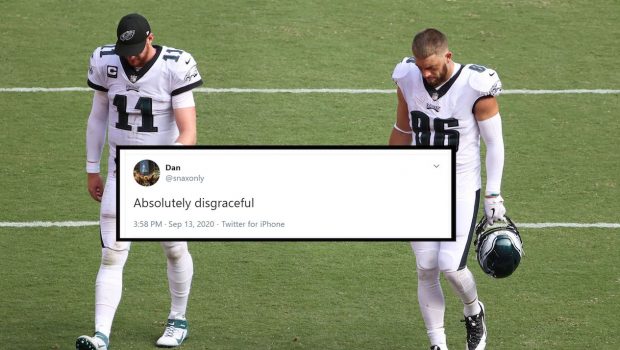 The national commentariat has its knives out for Eagles quarterback Carson Wentz.

Former NFL quarterback and ESPN analyst Dan Orlovsky has been one of Wentz’s biggest supporters.

“He’s the reason they lost the football game,” Orlovsky said on ESPN’s Get Up on Monday about the Eagles defeat Sunday in DC. “I can put it on one person’s shoulders.”

At first, Wentz and the Philly offense couldn’t do anything wrong. The Eagles passer began his afternoon completing 14 of his first 17 passes for 174 yards, two touchdowns and a near-perfect passer rating.

Then, with the Eagles leading 17-0 midway through the second quarter Wentz made an errant throw that was intercepted by Washington corner Fabian Moreau.

In the third quarter, with Philly still up 10, Wentz threw another interception, this time to second-year cornerback Jimmy Moreland. Washington used the short field once again to their advantage, as Peyton Barber scored to trim the deficit to just three.

Throughout the afternoon, Washington’s defensive line was dominant. The defense finished the game with eight sacks on Wentz, the most of his career. Philly would not score a point in the second half, as Washington scored 27 unanswered to upset the reigning division champs.

Wentz’s turnovers allowed Washington’s defense to gain confidence, and the defensive front then began to feast. That’s where Orlovsky was disappointed the most with the quarterback.

“For the Eagles to go up 17-donut, the only way Washington comes back in that football game is you turn the ball over and let the defensive line become dominant,” Orlovsky said.

“I played for Gary Kubiak,” Orlovsky continued. “When we would have to go play against the Indianapolis Colts and they had Dwight Freeney and Robert Mathis, Kubiak would start our week by saying to the quarterbacks: ‘Do not let this defensive line win the football game.’ He would say it all week, and that would be the last thing we would hear. ‘Don’t let the defensive line ruin the football game.'”

For all the talk of how dominant Washington’s defensive line was on Sunday, much had to do with the health of the Eagles front. Philadelphia began the game missing three starters along the offensive line, including All-Pro right tackle Lane Johnson who was ruled inactive 90 minutes before kickoff.

Orlovsky doesn’t want to hear the injury excuses from Wentz; he believes the Eagles passer is too talented for that to be the reason for his struggles.

“I understand there were injuries; I’m aware of that,” Orlovsky said. “But, you are a good enough player, you’re experienced enough, you’re mature enough, you went through last year to understand there is a difference between being a player, a talent and being a quarterback. You did not quarterback your team well enough. You let that defensive line get going and then they got going and going and momentum took over.”

Wentz must turn things around quickly. Over the next four weeks, the Eagles have a daunting stretch that includes a home date with the Rams and road clashes with the 49ers and Steelers.

“They cannot survive this way,” Orlovsky said. “If Carson Wentz does not fix this today, then they got big-time problems moving forward in these coming weeks.”