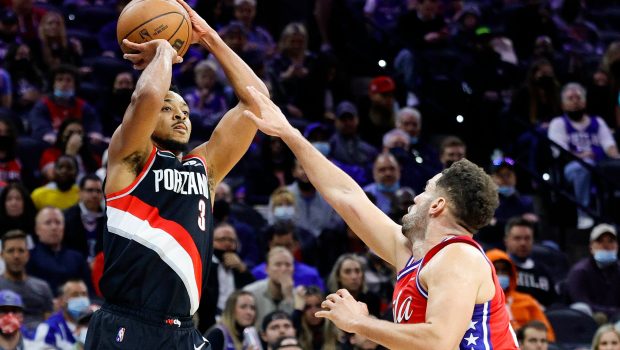 DAME DROPS 39, SHOWING SIXERS FANS WHY HE SHOULD BE IN PHILLY!

If you have been wondering why Sixers fans have been salivating for a trade that brings Dame Lillard for the awful Ben Simmons, last night produced the answer.

Lillard dropped a season-high 39 points on the visiting Sixers in a 118-111 win.

Tobias Harris and Tyrese Maxey each scored 28 points for he Sixers, and Joel Embiid missed his seventh straight game after entering the NBA’s COVID-19 health and safety protocols.

Lillard struggled with his shot to start the season, shooting career-lows across the board. But the six-time All-Star believes he is starting to round into form on the offensive end.

“I said it after we played Philly (Nov. 1): These moments give you an opportunity to rise. It shows your true character, whether you can deal with hard times and criticism,” Lillard said. “The last five or six games, I’m starting to feel better and better. I still don’t feel completely in form but I’m getting there.”

The Blazers closed the game with Larry Nance Jr. in place of Nurkic for the third straight game. After being subbed out for Nance with 4:23 remaining after committing two fouls seconds apart, Nurkic threw his mouthguard on the floor in frustration before Lillard spoke to him on the bench.

“Any time you get subbed out of the game late, there’s going to be frustration,” Lillard said. “It’s happened a few times over this homestand if teams go small. I told him, ‘I understand why you’re upset.’ I would be more curious if he wasn’t upset. But I told him on both of those fouls that he got, if his man turns the corner, it’s my job to be the help. He’s got to trust that the low man is going to be there.”

Said Billups: “If the big picks up two quick fouls, they’re going to keep going to that, so I went back to Larry so we can switch 1 through 5. At the end of the day, I’m just trying to get the win however we can get it.”