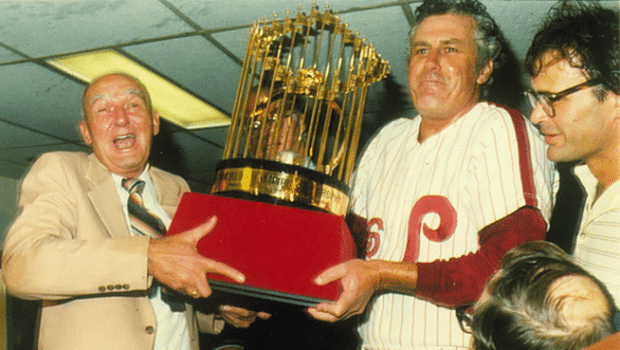 WHEN DALLAS GREEN TOLD YANKEES OWNER GEORGE STEINBRENNER TO FIRE HIM INSTEAD OF HIS COACHES — GUESS WHAT!

After managing the Phillies to the 1980 World Series title (above) and leaving Philly, Dallas Green became the general manager of the Chicago Cubs and built the team that won the National League East title in 1984 but lost the league’s championship series to the San Diego Padres.

Green returned to managing in 1989, for the Yankees. He was as blustery as the owner, George Steinbrenner, who had made hiring and firing managers, especially Billy Martin, almost standard procedure. But Steinbrenner, who had attended a military academy, found hiring a disciplinarian like Green irresistible.

They did not get along. With the team’s record at 56-65, Steinbrenner dismissed him. The issue, Green said, was that Steinbrenner wanted to fire four of Green’s coaches. “Why don’t you just fire the manager and then make all the coaching changes you want?” Green said he told the owner.

Steinbrenner did, replacing him with Bucky Dent.