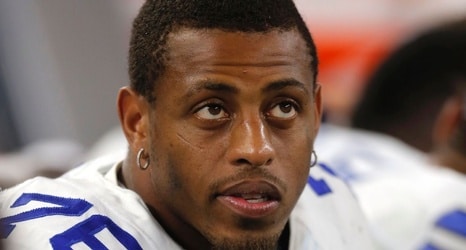 DALLAS DOUBLES DOWN: HIDEOUS GREG HARDY WILL PLAY VS. EAGLES!

If you were hoping that Dallas owner Jerry Jones and his glove puppet son Steve would have seen the light on domestic abuser Greg Hardy (above):

I’ve got a bridge in Brooklyn to sell you!

Ian Rapoport of NFL Media reports that the status and playing time of Cowboys defensive end Hardy won’t change despite Friday’s photo dump by someone who apparently wasn’t happy that the criminal charges against Hardy had been officially expunged one day earlier. It’s obvious because owner/G.M. Jerry Jones already has made it clear that the photos have no impact on the team’s attitude toward Hardy.

Then again, maybe the Cowboys didn’t really know that Hardy had done anything wrong until they saw the photos.

“We really did our homework and our investigations,” Jones told Bernard Goldberg of HBO’s Real Sports with Bryant Gumbel in September. “And the facts are that he was not convicted.”

“He wasn’t convicted because the girlfriend didn’t show up after he was convicted the first time,” Goldberg said in response.

“Yes, well, you could say that,” Jones replied. “But he might not have been convicted because he didn’t do it.”

That “might not have been” has now gone out the window, given the photos and Hardy’s general statement of regret. But it’s still not changing how the team views Hardy.

It’s not changing how the team views Hardy because, in every sport at every level, excuses are made for the stars and examples are made of the scrubs. If you have any doubts about that, look no farther than how the Cowboys handled Hardy, and how they handled Joseph Randle.