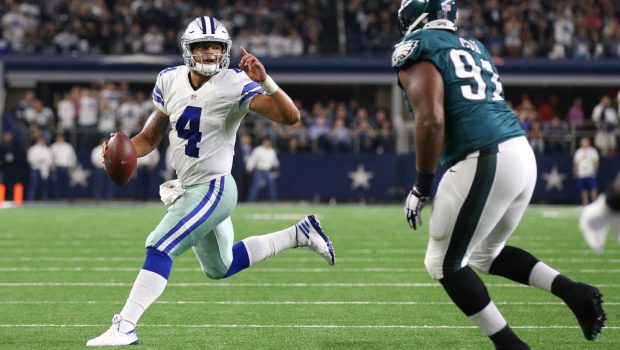 DAK WON’T BE BACK AGAINST EAGLES TONIGHT, WEEK 7 IFFY TOO!

Cowboys quarterback Dak Prescott is out of tonight’s game against the Eagles and may not return to practice in Week 7, according to Ian Rapoport of NFL Network.

Rapoport also reported Prescott’s surgically repaired thumb “must improve” for him to be on the practice field Wednesday.

Prescott suffered a thumb injury that required surgery during a Week 1 loss to the Tampa Bay Buccaneers and was given a six-to-eight-week timetable. Dallas elected not to place him on injured reserve, and there was no shortage of updates as he recovered.

The 29-year-old said he could grip a football ahead of the Week 5 game against the Los Angeles Rams, though he hasn’t seen the field yet.

Any long-term injury to Prescott figured to derail the Cowboys’ season at the start of the campaign, but Cooper Rush has filled in admirably and has gone 4-0 as a starter.

It has kept Dallas in the early playoff picture, and now Rush will get another start versus the undefeated Eagles.