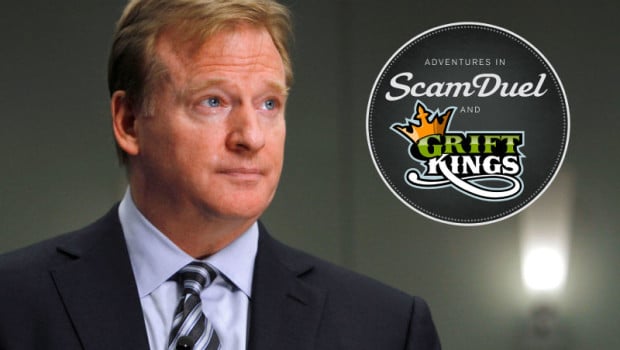 In many regards, the scandal that is now enveloping daily fantasy sites FanDuel and DraftKings is yet another example of the fecklessness of NFL commissioner Roger Goodell.

It doesn’t take a Yale-educated lawyer to see that these daily sites are just a dodge around the law that bars gambling on sports events everywhere but in Nevada.

Goodell should have and could have put a stop to this activity, but of course he didn’t because, although it should be illegal, it generates a lot more money for the NFL ATM.

It is similar to the garbage Donald Trump was spewing a few years ago that President Obama wasn’t truly an American citizen because, Trump said, there was no proof he was born in this country. Of course, Obama produced his birth certificate, but the media and the GOP just let the blowhard spread his vile.

And now we all are made to endure Trump as a presidential candidate!

This has been the season of daily fantasy. Yes, it was always there, but this year, the biggest players—FanDuel and DraftKings—have gone all in, buying up seemingly every possible piece of ad space available in sports media. There they are, sponsoring one of the biggest fantasy writers. There they are, advertising during every damn game. There they are on your TV, on your iPhone, on your podcast (even the one done by this website). The logic behind it isn’t hard to deduce. They make lots of money and want to make even more. What better way than to go big during football season, their most popular sport?

But this fall hasn’t been kind to daily fantasy. There’s been the backlash to all that sponsored content. There’s the fact that everyone agrees that all those ads are annoying. And of course there’s the DraftKings employee with access to inside information who won $350,000 at FanDuel, soon followed by New York state Attorney General Eric Schneiderman launching an investigation into the two sites.

If daily fantasy has, up to now, enjoyed a sort of marginal respectability, that’s largely because the NFL has embraced it as the NFL gambling option of choice, all while consistently pointing to the obviously absurd yet Congressionally-approved claim that daily fantasy isn’t gambling, but rather a game of skill. The NFL makes huge money off of daily fantasy, all without contradicting its ridiculous anti-gambling stance. And when it comes to it, the league—like any supplier at the top of the chain—knows to offer the best defense: We can’t help it if there’s so much demand for our product.