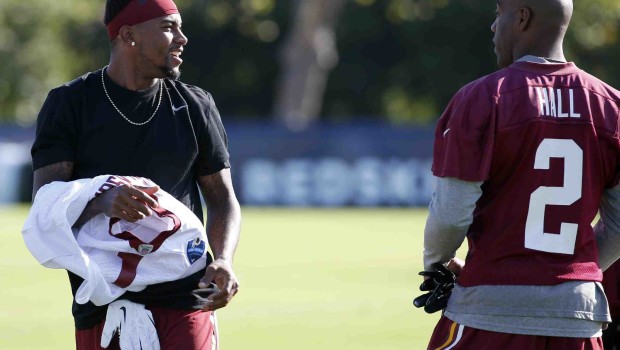 D-JAX’S WHINE: ‘IN PHILLY … THEY BOOED THEIR OWN PLAYERS’

It didn’t take long for DeSean Jackson to throw Eagles fans under the bus.

“You had the Philly fan base, now you have this Redskins Nation,” Comcast SportsNet’s Chick Hernandez said to Jackson (left in above photo) this week. “I can see the smile on your face. It’s a little different. Can you describe it?”

“It is different,” Jackson agreed “You know, they’re very supportive here. They’re open. Being out on the field, I’ve been hearing certain things, but they’re good things. In Philly, sometimes things could have gotten a little negative. They booed their own players. But here, you don’t really get that. They’re supporting you, they’re out here.

“I mean, just as many people as [were] here in the morning practice come to our walkthrough practices, so that shows you something,” Jackson went on. “To not really have a practice and people are still sitting here through a walkthrough, they really are big fans and they support us. Every time we come out here, guys are screaming things at me. And that’s just a great fan base to really have.”

Booing is like breathing in some Philly arenas. If you recall, the Redskins were booed at home several times in 2013, mostly during the horrendous second half of the season. But they were also booed going into halftime of their much-hyped season opener, which happened to be played against — that’s right — DeSean Jackson’s Eagles.