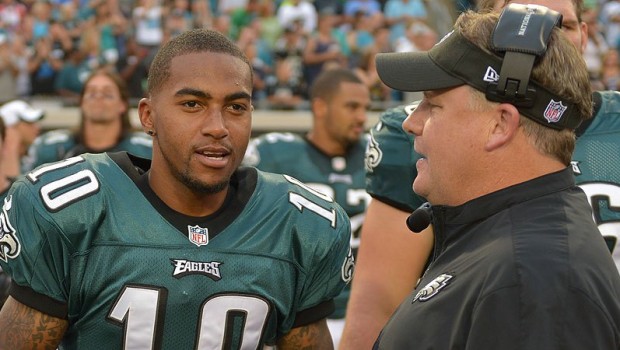 It has now been eight months since Eagles coach Chip Kelly made what was then — and still is — a controversial decision and cut star wide receiver DeSean Jackson, who had his best season in the NFL in 2013 under rookie coach Kelly.

The airwaves and all other forms of media have been filled with opinions about why it happened. A sample:

Kelly and the Eagles claim it was a football decision.

Jackson was signed by the Washington Redskins, and here is a comparison between how well he performed last year for the Eagles and in 2014 for the Redskins:

You can judge for yourself.

It has now been four days since Redskins QB Robert Griffin III made the comment in a lengthy postgame press conference that sparked a controversy.

His words — an attempt to make a point about personal responsibility — were taken out of context, cast as “throwing teammates under the bus” and seemingly provoked Jackson to post a potent, if cryptic quote on Instagram, “You can’t do epic [stuff] with basic people.”

On Monday, Griffin clarified his intent during a team meeting, and coach Jay Gruden called for a stop to anything that could be construed a bickering interviews or on social media.

On Thursday, Jackson was asked about his posting and did little to clarify to whom it was directed. “Whoever thought I was talking to him, then they can take it how it was taken,” Jackson told reporters after practice.

Jackson, 27, a seven-year NFL veteran, went on to say that criticism was a big part of life in the NFL and the only way to avoid was to play well.

“Depending how you play and how you show your game on Sundays or Mondays or Thursdays is what they critique you on,” said Jackson, whose 20.5-yard per catch average leads the league. “So the best thing you do is go out there and play at a high level and put everything else to the side and kind of erase what has happened and just play good on Sundays.

Jackson was the Redskins’ highest profile free-agent acquisition, signed after being released by Philadelphia, which won the NFC East last season.

He conceded that being part of losing season was “definitely frustrating.”

“I felt I played at a high level where I’ve been in my past,” Jackson said. “To come here now and kind of struggle and have a disappointing year is a tough situation to be in. But we all have to fight it out ourselves. We’re in it together.