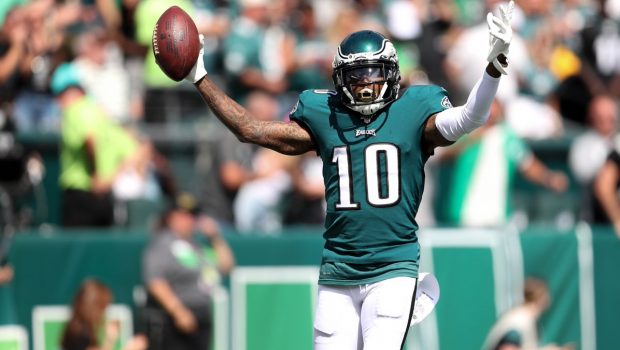 D-JAX WILL BE BACK, BUT EAGLES NEED BIGTIME WR UPGRADES!

Eagles wide receivers Alshon Jeffery and DeSean Jackson ard both are coming off injury-riddled seasons and they’re each another season older.

Nelson Agholor is scheduled to be an unrestricted free agent after a disappointing 2019.

How do the veterans figure into the picture for 2020? Where does Greg Ward, who stepped up once he got the chance, fit into the offense? What are the Eagles going to get from second-year man J.J. Arcega-Whiteside now that he’ll have a full offseason to make himself better in 2020?

The Eagles have a handful of other young receivers who are going to compete, they’re going to have a new coach, and they’ll have to make sure they significantly bump up the collective production from the wide receiver group.

When the Eagles lost Jackson after Week 1, they lost so much of their explosiveness in the passing game. Jackson will return and he’ll still be the fastest player on the field – at least, that’s the expectation – but the Eagles need more here. They are likely to add considerably at wide receiver.