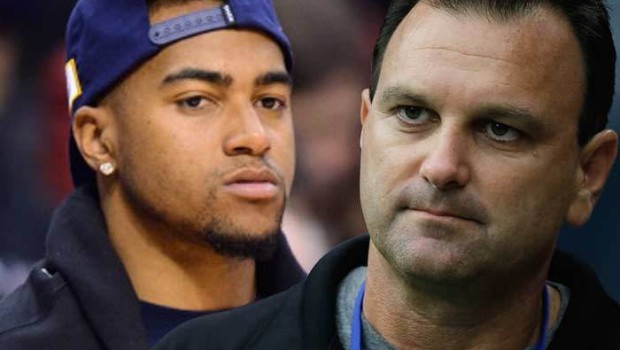 D-JAX VS. ROSENHAUS — WHO CAN YOU POSSIBLY ROOT FOR????

When a whining and overrated wide receiver files a lawsuit against his former agent with a reputation for duplicity, most fans would agree:

“Is there a third party to root for?”

DeSean Jackson says his former agent, Drew Rosenhaus, was the driving force behind his ill-fated holdout with the Eagles three summers ago, according to a legal filing obtained by Yahoo Sports.

Jackson says he hired Rosenhaus, in part, because the agent assured him he had “close ties to Eagles management” and could persuade the team to renegotiate the wide receiver’s contract “before or during the 2010 NFL season.” At the time, Jackson still had two years remaining on his deal.

Jackson’s revelations were made in a federal court filing last Thursday related to a long-running financial dispute between him and Rosenhaus over $516,000 that Rosenhaus paid the wide receiver to become and remain his client.

Rosenhaus failed to get Jackson a new deal prior to or during the 2010 season. Jackson says Rosenhaus urged him to hold out during training camp in the summer of 2011 in order to force the Eagles to give in to the agent’s contract demands.

“In the end, the holdout served only to embarrass Jackson, undermine his credibility and diminish his negotiating leverage with Eagles’ management,” said Jackson’s attorney, William Quinn of global law firm Morgan, Lewis & Bockius, in the filing.

Jackson was so angry over the botched holdout that he says he told Rosenhaus he was going to fire him, but ended up staying with the agent after Rosenhaus paid him and his family $143,088 to remain a client. NFLPA regulations prohibit agents from “providing or offering money or any other thing of value to any player … to induce or encourage that player to utilize [his] services.”

“We went over the contract on the car [on the side of the road],” Rosenhaus said in an arbitration hearing in September of 2013. “I waited until I saw on my phone that it was after midnight. We proceeded to execute the contract. After executing the contract, I then gave DeSean the money that we agreed to give him. I gave it to him in the [Louis Vuitton] bag.”

At issue is whether Jackson must re-pay Rosenhaus given that the agent appears to have violated the NFLPA’s regulations that prohibit agents from paying athletes to sign with them. Players are not obligated to pay back agents any money that was given to them in violation of the union’s rules on inducements. Further, the rules state that an agent found to have induced a player to sign with him must pay back any agent fees he had collected from the player to that point.

Long-time NFLPA arbitrator Roger Kaplan recently ruled that Jackson has to pay Rosenhaus over a half million dollars in unpaid “loans” and agent fees, but Jackson argues in the recent filing that the award should be vacated because Kaplan’s decision was based on bias and/or corruption and that the arbitrator ignored union regulations, then created his own rules in order to reach the “outcome he preferred.”

Jackson signed a three-year, $24 million deal with the Redskins in April after the Eagles cut him following six seasons in Philadelphia.